Jammu Kashmir is listed as 15th state in Article 1 of the constitution of India defining geographical territory of India.. The British exploited India in every aspect, be it economic, social or cultural for almost 150 years. Finally, the British left India in 1947, but before leaving they partitioned the India to create the dominion of Pakistan.

The British India was partitioned and the Princely States were given the right to join the dominion of India or Pakistan. However, the decision to join either of the dominion was exclusive prerogative of the ruler of the concerned Princely State. Exercising this power the ruler of J&K, Maharaja Hari Singh integrated J&K with India by signing the Instrument of Accession on 26th October 1947 and the Governor General of India, Mountbatten accepted it on 27th October 1947.

After its formation, Pakistan was hoping that J&K will join Pakistan, but this remained a far- fetched dream for Pakistan. Anticipating the accession of J&K with India, Pakistan attacked J&K on 22nd October 1947. By the time the Indian army reached J&K, Pakistan had captured huge territories of J&K. The Indian army compelled the Pakistan army to retreat, pushed them back and vacated many areas illegally occupied by Pakistan. On 31st December 1948, falling prey to the conspiracy of the British, the then Prime Minister of India, Nehru, took this matter of Pakistan aggression to the United Nations. Nehru got trapped in the web of illusion of the international powers and their support and as a consequence, till date a huge territory of J&K is under illegal occupation of Pakistan, which we know as Pak Occupied J&K or POJK- Mirpur, Bhimber, Kotli, Bagh, Muzafarabad, Gilgit, Baltistan etc are part of POJK.

The illusions of Pakistan and its repercussions:

Javed Abbas was an officer with Pakistan Army. While he was Lt Col. in Command & Staff College, he was assigned a research project, ‘India- A study profile’. He completed his study in three years and published it in 1990. As per this study India has its own share of problems and by taking advantage of these problems the large and powerful army of India could be controlled. Although, this study was conducted in late 80s the mindset of Pakistan army, from the beginning, was reflecting this fallacy about India.

Right since the time of partition, Pakistan, more so the army of Pakistan, has considered J&K as its unfinished agenda, and hence, it consistently creates problems in this J&K state of India. Ayub Khan was the first army General who forcefully took over the reins of Pakistan from President Iskander Mirza during the Martial Law. Ayub Khan believed the Indians to be sick and very weak. According to him ‘the Indians had very low morale, hence they cannot survive any severe blow and they break.’ Under the influence of this misconception Ayub Khan had attacked India in 1965. The then Foreign Minister, Zulfikar Ali Bhutto, had assured Ayub Khan that India will not attack on the international border. Ayub Khan and his army were so confident of this illusion that on 3rd December 1965, when the Indian army had reached the periphery of Lahore, the Pakistan army was busy in its morning routine exercise. Ayub Khan was so shaken up by the response of the Indian army, that in his cabinet meeting he said, “I cannot put 100 million Pakistanis in danger for the sake of 5 million Kashmiris”.  Ayub Khan could never improve his image after the defeat in 1965 war with India.

Yahya Khan, another General of Pakistan army, just like Ayub Khan, suffered from the same delusion about India. In 1971 some astrologer told Yahya Khan that he will be the Head of the State for next 10 years, which made him very happy and over confident. However, he was unaware of the reality, that he wouldn’t continue even for next 10 days. Obsessed with self-praise, when Yahya Khan and his team were asked that how are you going to fight India? His response was ‘On the basis of the historical superiority of the Muslim fighters’

However, when told about the attack by Indian army on East Pakistan, the response of this spineless President was “What can I do for East Pakistan, I can only pray.”

One can picture the functioning of the Pakistan army, which was so blinded by power, that the Naval Chief of Pakistan got to know about India’s air strike through Pakistan radio, while on his way to his office. Lt Gen A K Niyazi found out about this air strike through BBC World Service. Just as Ayub Khan had blamed the Kashmiris, Yahya Khan said, “I cannot put West Pakistan in danger for the sake of Bengalis”

Pakistan was defeated in both 1965 and 1971 wars, despite these defeats the vicious thinking of the Pakistan army did not change. Twice before the1999 Kargil war, the Pakistan army had made proposals to attack India from Kargil side and these were even presented to the political leaderships in Pakistan, however both the times these plans were rejected by the political leaders. Once it was Zia ul Haq and second time it was Benazir Bhutto. When this plan was presented to Bhutto the DGMO of army was Parvez Musharraf, who was the Chief of Army during Kargil War.

Twice the plan to attack Kargil was halted by the political leadership of Pakistan, however, the third time it was executed under Parvez Musharraf, who was the Chief of Army at that time. Along with Musharraf, three other army officers played key role, these were, Lt Gen Mohammad Azeez Khan, Lt Gen Mehmud Khan and Major Gen Javed Hasan.

Besides these one more man played a role in the war, that was Lt Col Javed Abbas, Musharraf was very impressed with his research on India, “India- A study profile”. He was under the impression that he will attack India and India will be disintegrated.

The main aims of Pakistan to attack Kargil were as follows:

-To stop the supplies on the National Highway, which connects Srinagar to Leh.

-This was planned assuming that the blockade of supplies, will delay the retaliation by the Indian army.

-Pakistan was sure that India lacked the capability to push Pakistan army back from their location.

-Besides these, it is also believed that there was a larger motive which was directly connected with the smallest region of J&K, that is Kashmir. However, the details are not known because after the Kargil attack, the response of the Indian army was beyond the imagination of Pakistan army.

-As per the theory of larger motive, Pakistan had requested Mulla Rabbani, the head of Taliban in Afghanistan, to send 20,000-30,000 young boys for Jihad against India. Apparently, Rabbani had promised about 50,000 boys, which made the Pakistan army officers very happy and optimistic.

Musharraf was restless to take Kargil. Before the 1965 war, Pakistan army used to be on the peaks of Kargil. This area is very important from the security and strategic angle. After the 1965 and 1971 wars, India had control over these peaks, and now Musharraf wanted these peaks back.

-Pakistan also wanted to project Kashmir as an international dispute which may culminate into a Nuclear war and hence immediate third party intervention is mandatory.

-Violate the LOC and occupy the unregulated areas of Kargil.

Pakistan was clueless about India’s capability to retaliate. At one point Musharraf conceded and said that India retorted not only through military action but also through the international diplomacy.

Soon after the Kargil attack, Indian political leadership and the army was caught unaware and there was some level of uncertainty  but soon they started action and gave an apt reply to Pakistan by reclaiming each peak from Pakistan’s occupation.

On 13th June 1999 the Indian army freed the Tololing peak from the Pakistani occupation, this was a great help in the rest of the war. Soon on 20th June 1999 the Point 5140 was also reclaimed, completing the Tololing mission. 4th July 1999 was another day of achievement when the Tiger Hills was freed from the intruders. The Indian army continued its march ahead and won all the peaks in the Batalik sector, pushing the enemy back.

The 14th regiment of Indian army used the powerful Bofors guns to target the Pakistani intruders and soon India started the airstrike in the LOC.

Pakistan incurred huge losses. A large number of Pakistani soldiers died in Kargil war. The Northern Light Infantry got almost wiped off in the Kargil war.

Shamshad Ahmad Khan, the foreign secretary during Kargil war said that ‘such times are very bad for any foreign department. We tried our best but the whole world declared us responsible for the war. We were under tremendous pressure from the world and we were asked to retreat, our political leadership took the correct decision to retreat.’

The former Lt Gen Ali Kuli Khan declared the Kargil defeat as the worst defeat for Pakistan in history, which claimed many innocent lives.

Many facts related to the Pakistan army came out during the Kargil war, including the fact that a large number of Pakistan army officers are addict to substance abuse.

The Kargil War- Embarrassment for Pakistan on every front

The Kargil war completely exposed Pakistan as a state. The then Prime Minister and the Chief of Army kept playing the blame game. Nawaz Sharif the PM said that he had no clue about the Kargil attack, where as Musharraf, the Army Chief claimed that Sharif knew everything. Whether Sharif knew about Kargil or not, in either case, it is embarrassing for Pakistan. If the PM really didn’t know about this misadventure of army then it proves that ‘Pakistan does not have an army but army has Pakistan’

Parvez Musharraf claims that Pakistan won the Kargil war, but the truth is that Pakistan had abandoned its soldiers to die in the high peaks of Kargil. The autopsy report of many Pakistan soldiers shows that there was grass in their stomach, which means they had nothing to eat.

Musharraf wrote in his book that ‘what was earned by the army was lost in diplomacy.’ But Nawaz Sharif in one interview said that ‘when I went to seek help from the US, and USA agreed to help, by then the Indian army had vacated the territory from Pakistan soldiers and was forwarding at a rapid speed. It was me who saved the Pakistan army from embarrassment.’

Since the time of its inception, there has been no system of accountability in Pakistan. Imagine, the army chief responsible for such a huge blunder became the President of Pakistan and the army officer who led the army in this war, got promoted.

In all one may conclude that Pakistan was a victim of the Fanatic Four (the four army officers who plotted the Kargil attack) and Kargil proved to be one more failed attempt of a failed state. 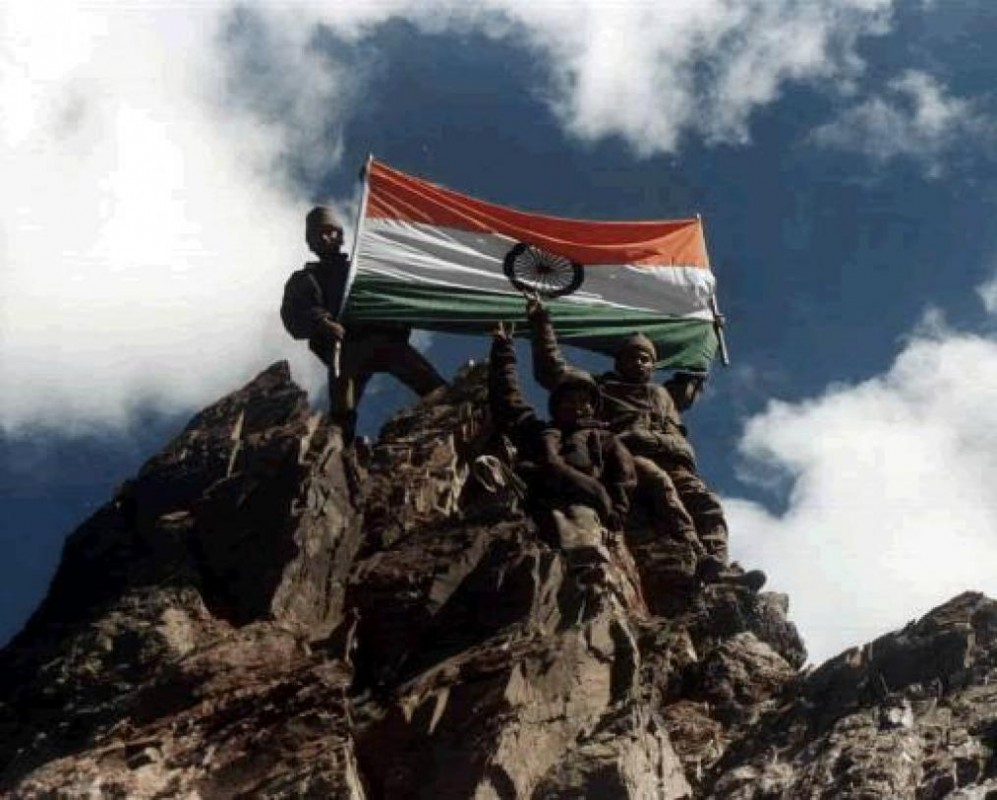 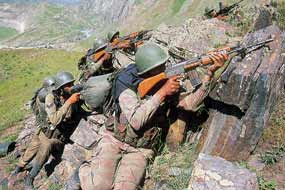