Udupi, Karnataka world famous for the Sri Krishna temple, has 8 Mutts started by the propounder of Dvaita school of Vedanta Sri Madhwacharya in the 13th Century and Pejawar Mutt is one among them. Vishwesha Tirtha Swamiji was the pontiff who was the senior most among the ashtha mutts. A biennial administration of the Krishna Temple goes to the eight mutts on rotation and Pejawar Swamiji Sri Vishwesha Tirtha Swamiji has had the maximum terms. He passed away on 29 Dec 2019 at the age of 88. (Born 27 April 1931) Swamiji was on life support since Dec 20 after his heath deteriorated after a pneumonia attack. His condition started to become critical and was brought back to the mutt where he breathed last. He was the seer who had heralded “Mama Deeksha Hindu Raksha” and earnestly worked for the cause of Hindu unity. 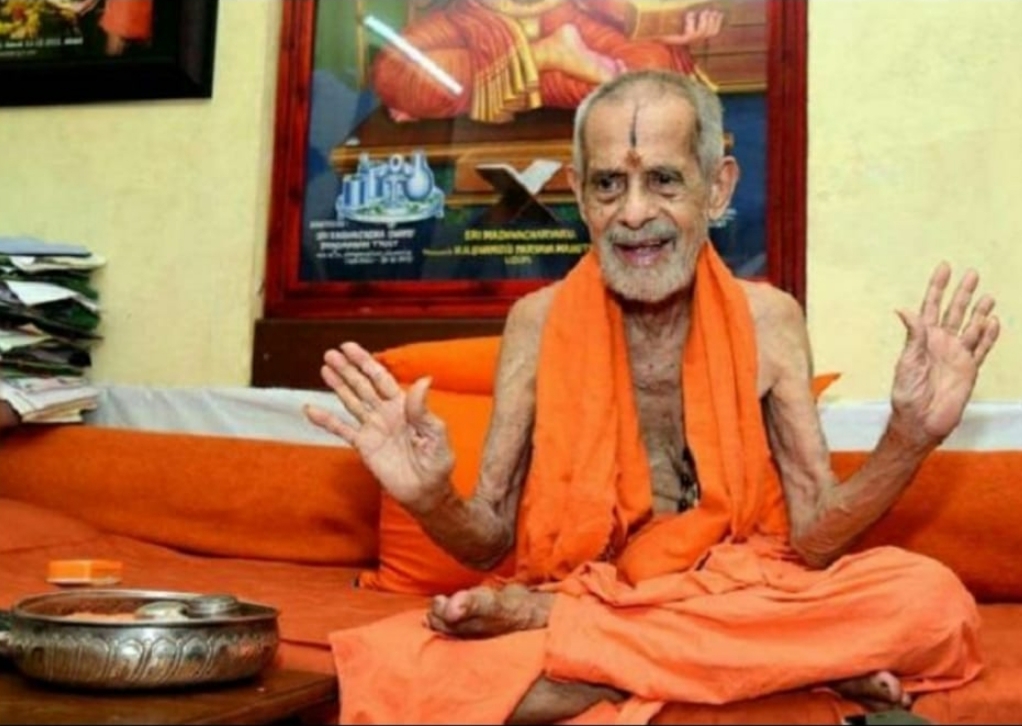 Some key points from the life of Swamiji collected from various sources is given below:

1. Swamiji in his pre-monastic life was called Venkataramana. He was born in Ramakunja, near Kukke Subrahmanya, Karnataka and he turned to become a sanyasi at the age of 7.
2. Swamiji fought against untouchability, rights of Dalits, to ensure they get entry to temples, homes and public places. He undertook padayatras in Dalit colonies. He was of a strong and a staunch opinion that despite many mutts in the nation the discrimination of people on the basis of caste was intolerable and was a shame to all the mutts.
3. The seer succeeded in putting the focus on conversions of Dalits to Islam in Meenakshipuram of Tamil Nadu. He undertook relief and rehabilitation measures for the victims of famine in Kalaburagi in 1975, by opening a gruel centre.
4. The Pejawar Mutt constructed 150 houses for the shelterless who lost houses to heavy winds at Hamsaladeevi in Andhra Pradesh. Rehabilitation work was undertaken for the victims of earthquake in 1993.
5. Hospitals and educational institutions for the poor were established in Bengaluru. The seer established tourist homes in pilgrimage centres across the country like Badrinath, Haridwar, Vrindavan, Puri and Tirupati. 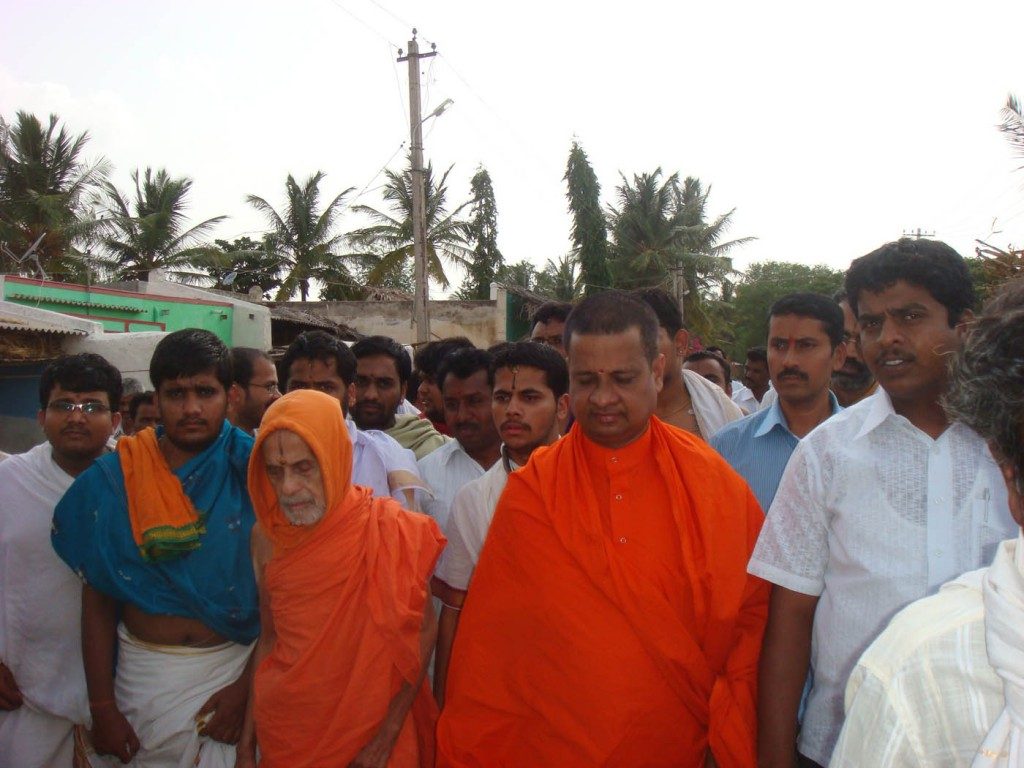 6. His vision of the Gurukula system of education made him start the Poornaprajna Vidyapeetha in Bengaluru. He was rested at the Brindavan at Vidyapeetha which happened to be his favourite place.
7. It is said that the idol of Sri Krishna had turned to the hymns sung by Kanakadasa who was denied entry to the Udupi temple and Pejawar Swamiji was instrumental in announcing a Rashtriya Kanaka Jayanti and constructing a Kanaka Mantapa in the temple.
8. Pejawar Swamiji was known for non-shy nature on public debates. He would discuss and deliberate on topics which needed clarification. It is said that there are instances where journalists like Lankesh who wrote against him viciously were confronted by Pejawar Swamiji at the former’s office and Lankesh had in his later writings admitted to have got the convincing clarification needed.He was known to be open to discussion and would willingly speak to media and share his opinions.
9. In 1953 when the then RSS Sarsanghachalak Guruji Golwalkar had met the 22 Yr Sanyasi, the Swamiji had asked Guruji – “Why did the partition occur in this country and is there a chance that we can get reintegrated?”
10. In 1965, Pejawar Sri played a significant role among many others in starting of VHP.
11. 1967 VHP’s clarion call – “Na hindu patio bhavet” was suggested by Pejawar Sri
12. 1969 VHP’s Udupi Sammelana was concentrated on eradicating untouchability from Hindu society. First Dalit IAS Bharanaiah was presiding over the Sammelana. The ghoshavakya Hindavah Sodarah Sarve was also suggested by Pejawar Sri. Over 600 swamijis had participated in it. 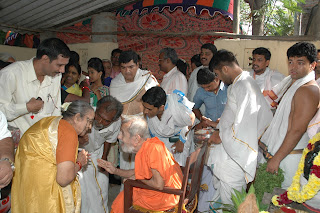 13. 1971 Udupi was the first to modernise the sanitary system and abolish manual scavenging to carry human feaces. Later it was brought to force in whole state of Karnataka. Pejawar Sri’s role is to be remembered here.
14. 1970 he carried out a padayatra at a Dalit colony in Malleshwaram. With the backlash he saw for his move, he had offered to quit from the role of Pithadhipati and work for the cause as a sanyasi.
15. Dalit Swamiji Madara Channaiah carried out a padayatre in 2009 at Krishnamurthipuram, a Brahmin dominated area in Mysuru. Pejawara Swamiji ensured that the padayatra should be centered over Madara channaiah swamiji and Pejawar Sri never stole the limelight but wholeheartedly supported it. Madara Channiah Swamiji broke out in front of media while reacting to the death of Swamiji and said Pejawara Sri treated him like a son.
16. At KGF, Kolar padayatre he was as energetic as possible for the padayatra started at 9 am and was ongoing till 3pm
17. DSS (Dalit Sangharsha Samiti) had challenged Swamiji for entry to temples at Challakere. Paejawar Sri performed puja at the temple in Challakere and ensured all are provided entry.
18. 1935, Babasaheb Ambedkar had said “I have born as a Hindu but will not die as a Hindu” During the book launch in Bengaluru on B R Ambedkar, Pejawar Sri had said, “All the mathadhipatis had not convinced Babasaheb on his stand, So I on behalf of everyone apologise to Babasaheb” 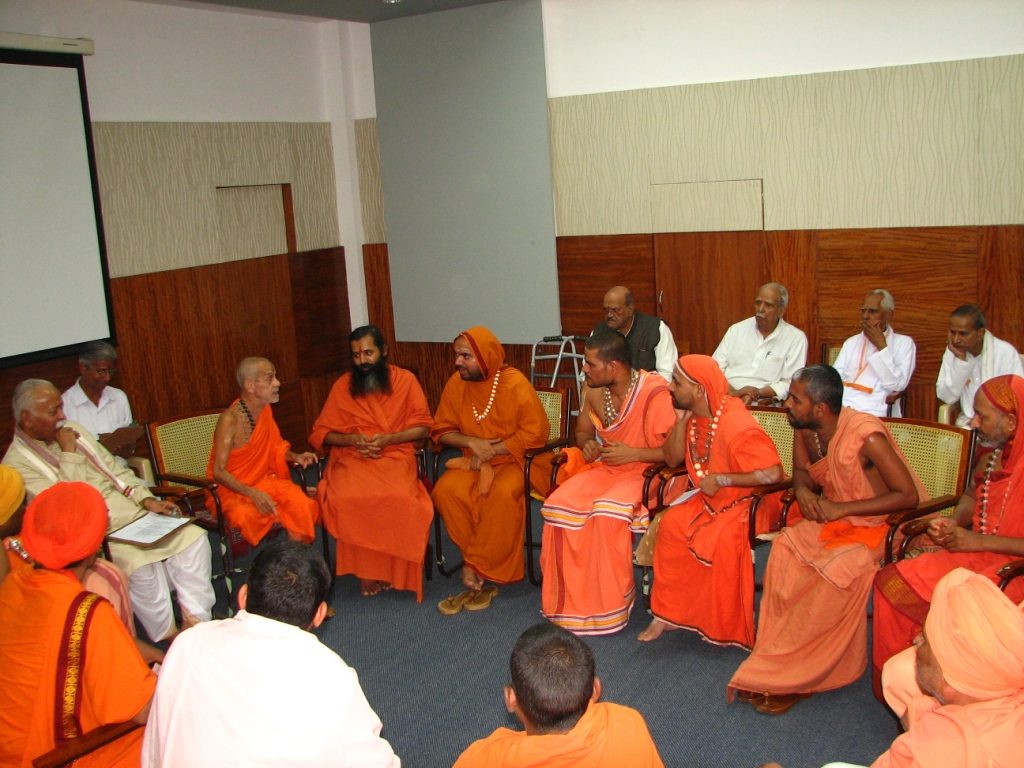 19. Even to the recent record he was approached by the Dalit activists on reservation and Pejawar Sri had assured them of speaking to PM Modi about the same.
20. There cannot be any other Sanyasi who would have fasted as much as Pejawar Sri. Be it atrocity on Dalits, on environmental issues Swamiji would fast. He is also remembered fondly for his fast during the SEZ land acquisition in Mangaluru and the government returned the land back to the farmers post Pejawar Swamiji intervention.
21. Aiming at binding the society, Swamiji’s Dalitara Kerige Nadige, a padayatra in the Maoist-affected areas was conducted.
22. He had also participated in the Janagraha Rally, Nov 2019 a demand which was putforth for public referendum towards construction of the magnificent Ram Mandir at Ramajanmabhumi Ayodhya. He said all sants have to reach out to PM Narendra Modi and demand for the same and he believed the PM  Modi would also reciprocate positively. For that to happen he demanded all Sants to be together and in case needed should be ready for a Satyagraha and demand for the same. Post the recent verdict, Swamiji had expressed joy that the dream would come true shortly
23. Swamiji has personally persuaded many youth to not get into Naxal movement and has ensured he visits the Naxal prone areas to help them come up better in life than lose themselves to the worst ever activism, He has also carried out ways of financially supporting the families affected by Naxalism.
24. Swamiji was progressive in his thoughts at his young age when the family of the pre-monastic life would enjoy some benefits in the mutt. Swamiji has written that he ended it and feels his parents might have felt bad about it but equality was quintessential.
25. Swamiji was one who would rise early perform toughest of the yogas, meditate, perform puja and would then dedicate time for social services.
26. When Dalit poet K B Siddaiah had invited Swamiji to his house, he has visited the poet’s family without any biases and displays.
27. Swamiji was a follower of Gandhiji and was subscribing to his Harijan weekly and was immensely inspired by it. It is also to be noted that he had decided to wear handloom saffron robe for life again inspired by Gandhiji’s Khadi movement.
28. While addressing RSS swayamsevaks in Hubballi’s Hindu Shakti Sangam, he had termed it as Vishwaroopa Darshana. He had also said, along with the golden concepts of Matru Devo Bhava and Pitru Devo Bhava, we must ensure that we observe the notion of Desha Devo Bhava.
29. He had organised a Iftar for muslims during their Ramzan month few years back and his car drivers were muslims and they worked with him for over a decade.
30. Political leaders like AB Vajpayee, L K Advani, Kalyan Singh, Uma Bharti, BS Yedyurappa, KS Eshwarappa have had close working relations with Swamiji. Uma Bharati reacting to the demise of Swamiji said that she had lost her father figure. 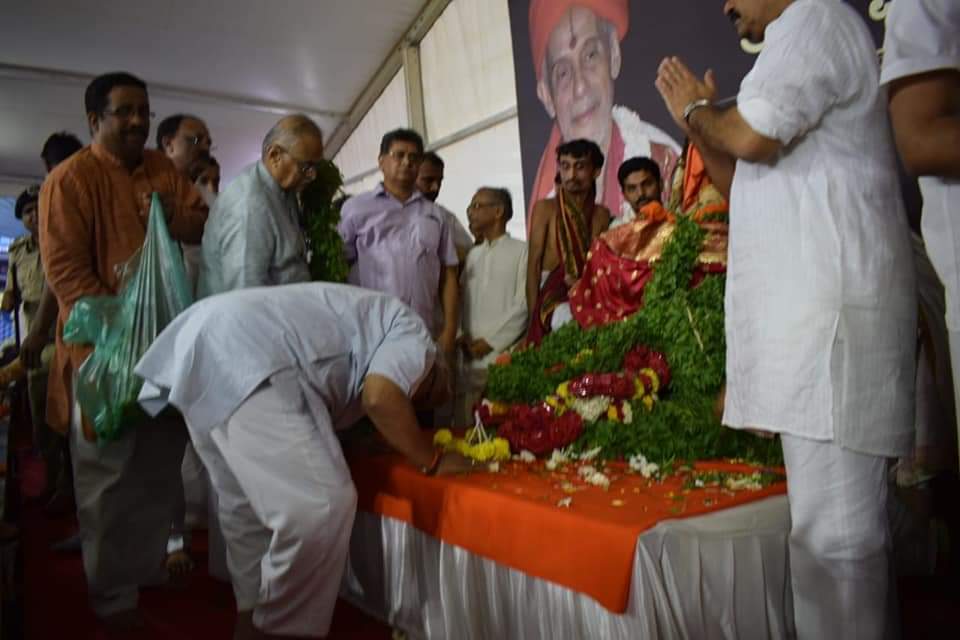 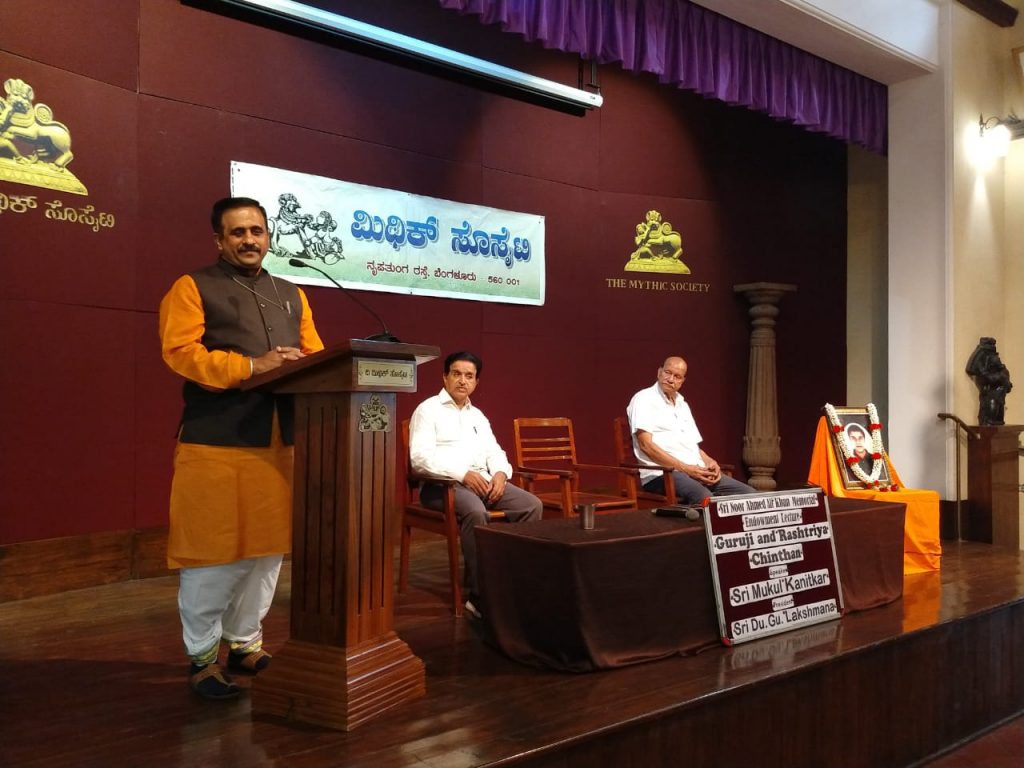