A bright star has disappeared from the political landscape of Bharat. The demise of former president Dr. Pranab Mukherjee is a huge loss for Bharatiya politics. Openly mingling with all, even with people having contrarian ideologies, while remaining true to one’s own ideology is a nearly extinct practice now. Discussing, debating and deliberating diverse thought processes was the norm in Bharatiya society. Indian National Congress of the pre-independence era was a palette of varied political hues that amalgamated to renew the vigour of the independence movement of our country. Communism-bred political intolerance and ideological untouchability is the new norm that became palpable in the recent past. Let alone the freedom of expression, the deadly combination of communist philosophy and terror deny even the right to exist to those who differ with their views, all over the world.

When late Pranab da consented to grace an RSS event he faced a huge backlash. Many forces schemed to prevent him from addressing a Sangh gathering. Petty politics of pitting his own daughter against her father through a public opposition was orchestrated. Pranab da was a sincere and seasoned statesman. At that stage of his political career, he had not set out to join the RSS by addressing its members. In fact, he was there to share his well-thought out political philosophy with swayamsevaks and other countrymen. His close allies and his well-wishers should’ve known better and trusted him as he was there to represent their ideology (read core Congress-ideology) for a brand new audience. Sadly, that didn’t happen,

Sangh’s third Sarsangahchalak Shri Rajju Bhaiya ji who hailed from Prayagraj(U.P.) shared a long-standing, intimate bond with Lal Bahadur Shastri ji. Once during Shastri ji’s active years in Uttar Pradesh politics, a tea-gathering was organised for few dignitaries in the presence of the then Sarsanghachalak Shri Guruji. Rajju Bhaiya had also invited Shastri ji to that event, he, however, declined by citing fear of garnering bizarre speculations from party members if spotted there. Dismayed by this response Rajju Bhaiya asked, “Shastri ji who will ever doubt a leader of your stature?” Shastri ji answered, “Oh, you don’t understand politics.” Shri. Rajju Bhaiya ji told him “That is not the case with RSS. If one Swayamsevak sees me talking to you (a Congress leader) he will assume Rajju Bhaiya must be explaining Sangh to Shastri ji.”

This is natural. Leaders of an organisation deserve trust. In order to create a social atmosphere conducive for democracy, sincere efforts to comprehend the thoughts and perspectives of others while staying committed to one’s own belief system are essential.

The political arena of Bharat is progressively bulging with new politicians each day, but the number of politicians that engage in sincere nation-building politics is limited. Politics that deemed national interest paramount have been pushed at the back and instead politics based on parties, one community or caste, region and language, even one family have hogged the centre stage. The gospel of a single family possessing a rare leadership potion that mystically qualifies all its members, generation after generation, as national leaders have eluded me for a long time. These members on the other hand have all along carefully branded themselves as the ‘guardians of democracy’. But what is even extremely shocking is to have members of the oldest political party of the country come to be convinced of an inexperienced person’s leadership prowess to lead their organisation.

Pranab da was an icon of the league of politicians who prioritise the country’s welfare and this league is fast dwindling. This makes his demise at this turn in time doubly painful. I am told during his tenure as the finance minister he sought the counsel of adherents of diverse political ideologies with an intent to expand his knowledge about the neighbouring countries. This attitude is a prerequisite of a healthy democracy and a strong polity. Therefore Pranab da’s consent to attend the event of Sangh – an organisation that has been in existence since the pre-independence era, has embodied the values of nation-building through service, ever growing and multi-faceted in nature – exemplified his allegiance to the cause of national stewardship. It takes a certain degree of open-mindedness and strength of character to be able to grasp such intentions, which in my opinion is beyond many people’s capacity.

Shri K. M. Munshi, a cabinet minister in the Nehru-led government, painted a portrait of Sangh which is unimaginable for those who now do business in the name of politics. Such insights can only be developed by someone who is in the service of this nation and engages in nation-building politics. His ability to pierce reasons behind Sangh’s aversion from mainstream politics and its interference in matters of social welfare, despite being in midst of his active political career indicates the character and ability of the individual.He pens those interpretations in the book ‘Pilgrimage to Freedom’ –

“I attended a rally of the Rashtriya Swayamsevak Sangh which we, Congressmen, had looked upon as an ‘unseeable’ pariah. I was struck by the discipline, determination and the spirit of selflessness which characterises its members. It had no financial backing behind it and no leaders of all-India fame to give it a status, and yet it functioned efficiently on an emotional bond.

I met M. S. Golwalkar, the Guruji (second Sarsanghachalak) of the RSS. Whatever our differences in political aims and methods, I could not help admiring the dedicated life he lived, his great power of organisation and his skill in building up the RSS, at the same time resisting the temptation to throw it into the vortex of politics.” (Pilgrimage to Freedom, P.86 by K.M. Munshi)

A Marathi article commemorating Dr. Mukherjee claimed Pranab da distanced himself from the Congress party at the time when it needed him the most and shook hands with the RSS. The writer was hinting at his Sangh address. I feel pity for that writer who fails to see that Pranab da is inseparable from Congress and vice-versa. It was foul play on the party’s part to reprimand a noble statesman like him by cornering him for a tiny difference of opinion. It is this immature politics of Congress that has weakened it and if continued, will lead to decline.

Pranab da’s unrelenting critiques have misread his actions and misinterpreted his choices because the ideological heritage they have inherited has never seen the practice of decent, frank discussions with one’s opponents. Hunting elephants is commonplace for lion prides but the fox clan cannot even imagine doing that. This may well be understood through this fable-

Once upon a time unable to find prey a lion brings home a fox kit one day. Overcome by her maternal instinct the lioness refuses to eat the kit. Both the parents decide to raise him alongside their new-born cubs. Later, one day, the cubs and the kit while playing in the forest, run into an elephant. Following their natural instinct, the cubs leap up to disarm the elephant. However, the kit, intimidated by the size of the elephant, stops the cubs from doing so. While narrating this incident to their mother, the lioness, cubs poke fun at the kit. Taking the hint the lioness reveals his true identity to the fox kit and advises him to leave the place, for she fears once grown up the cubs would prove to be a threat to his life. She consoles him using the following words-

No matter how many changes one goes through, there comes a time when their natural strengths and weaknesses come out! The time when the Congress must seriously rethink its values has come – whether to embrace the inclusiveness championed by Pranab da and Munshi ji or to remain shrouded in the communist dogma that promotes political untouchability.

The brand of political ethics practised by Dr. Rajendra Prasad, K. M. Munshi, Dr. Radhakrishnan, Shri Purushottam Das Tandon and Pranab da were integrative. The correct interpretation of their actions takes extraordinary curiosity and moral courage which is beyond the reach of those who engage in self-interest driven petty party-politics, communal politics, caste-based politics and dynastic politics. Instilling and emulating the values that Pranab da embodied among new generation of politicians will be the real tribute to his unmatched legacy. Pranab da is no more. Long live Pranab da. May the tribe grow and flourish 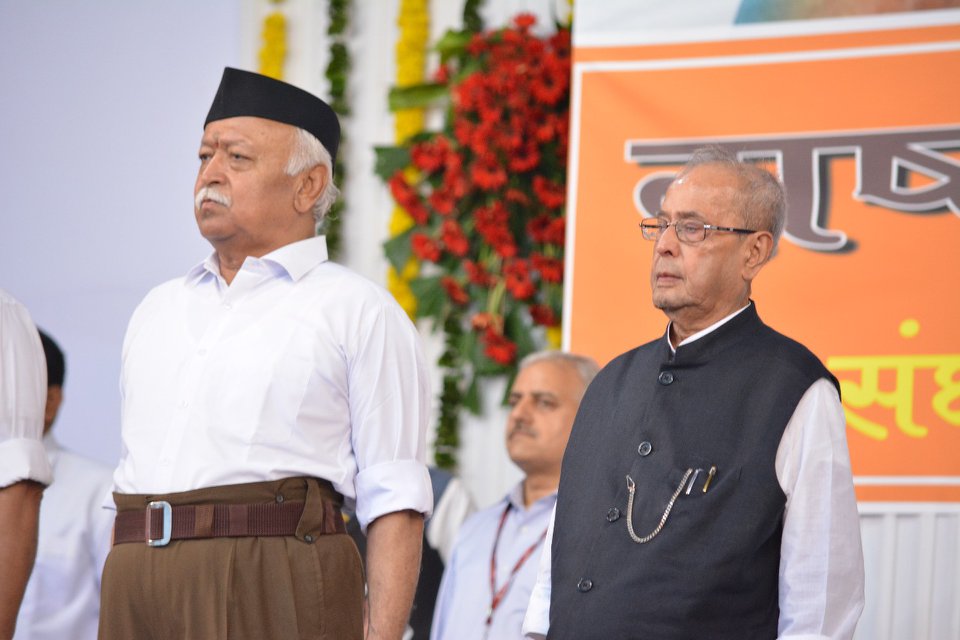