In a sudden development post the story of RSS Media Incharge for Karnataka South Pradeep Mysuru being blocked on Twitter by Jayanagar MLA Soumya Reddy of the Congress was broken by VSK Karnataka (Read it here), Congress MLA has unblocked the former a few hours ago.

While VSK in its report had not demanded Pradeep be unblocked and only urged people representatives to be open for debate, the unblocking seems to be in way of answering the public who persistently questioned the Congress MLA for blocking Pradeep. Twitterati questioned the stance of the MLA post VSK reporting it. The VSK team spoke to Pradeep Mysuru, the RSS Pracharak and asked for his first response after being unblocked.

Pradeep Mysuru guffawed and said the questions which were posed to Soumya Reddy in the first place remained unanswered. He listed down a few:

“Congress MLA Soumya Reddy’s clarification note stood more as a justification of such attempts let alone answering the questions posed in social domain and she seems to be supporting such cheap Christian conversions”, Pradeep opined in the call.

Pradeep further questioned if MLA Soumya Reddy had asked for the editing of the poster (according to her clarification), why are the posters of the edits not available in public domain till now? Has Soumya Reddy attended the event with all such cheap tactics in mind or is she oblivious of such immoral and unscrupulous things?

There has been a concerted effort of the missionaries to popularize Christianity and Samvada media has exposed quite a few instances which have happened in the State. Few years ago, the Christian conversion virus would break out during occasions like Christmas, but off late it has become a  perennial affair. Such kinds of cultural invasions are cheap tricks to woo and to eventually convert people to Christianity.

As Pradeep points out, Soumya Reddy needs to come clean on whether she had attended the “Christian” Rajyotsava, and why the poster she had requested to be edited is still not available in public domain? She also has to answer if she does support such unprincipled practices. 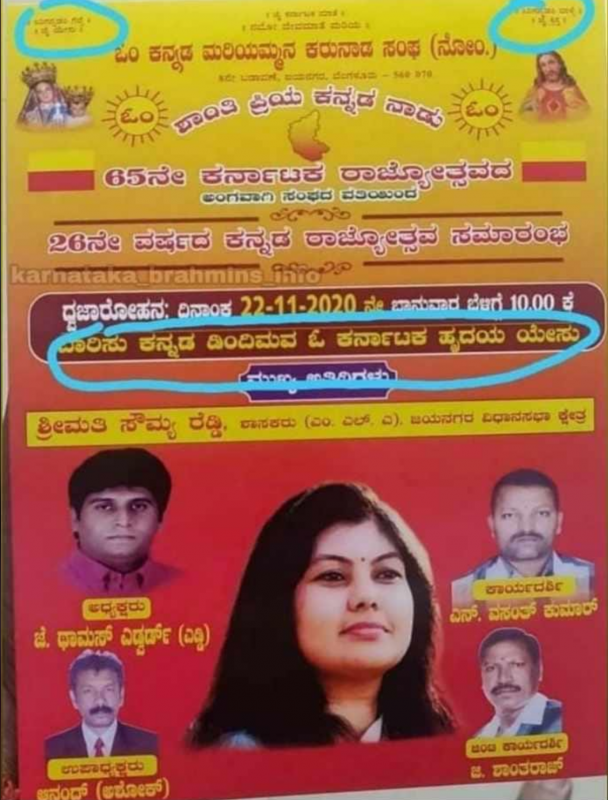