Skip to content
Akhila Bharatiya Pratinidhi Sabha (ABPS) is the highest decision making body of the RSS which meets once a year in different cities of the country. During the 3 day confluence of elected representatives of RSS,  resolutions are passed which have a direct connect with the on goings of the society and people. In the past RSS has passed resolutions on the need to protect traditions and beliefs of Hindu society, Bharatiya family system being a unique contribution to humanity, Grave concern on Jehadi Violence in West Bengal etc. In all, the idea behind such resolutions is to apprise the governments to make necessary changes in the existing system as well as urge the society on a thought which could synergize in transforming lives and Bharat in total.
In the year 2018, when the ABPS met in Nagpur there was a resolution passed on the need to protect and promote Bharatiya languages. ABPS was of the view that language is an important constituent of identity and active vehicle of the culture of any individual and society. The languages and dialects, prevalent in the country are most essential to protect our culture, noble traditions, excellent knowledge and vast literature as well as to promote creative thinking it had opined. It also had given clarion call to its Swayamsevaks and society in general that mother tongue should be used for communication within families. Apart from this, it had also expressed that the primary education, higher education across the country should only be in mother tongue or any other Bharatiya language. Preference was sought to Bharatiya languages in all governmental and judicial works. Also had the resolution urged Central and State governments to take effective steps to protect and promote all the languages, dialects and scripts of Bharat.
Kannada Abhivruddhi Pradhikara (Kannada Development Authority) which works for the development of Kannada language under the chairmanship of artist T S Nagabharana with its committee members including educationist Dr. Gururaj Karajagi, Prakash Belawadi, Malavika Avinash and many others  recently called on central ministers Nirmala Sitaraman, Prakash Javadekar and Prahalad Joshi. They handed over a booklet to the central ministers  which has the demands related to development of Kannada. The booklet has the reference of RSS’ ABPS resolution on the need to promote Bharatiya languages.
This year’s  Akhil Bharateeya Prathinidhi Sabha – 2020 is hosted in Bengaluru. The proceedings will begin on 15th of March in Bengaluru and conclude on March 17. This is the 7th ABPS meet happening in Karnataka and the 5th in Janaseva Vidya Kendra, Channenahalli, Bengaluru.
The meet will discuss the ways to take RSS work to the unreached and undertakes planning for expansion and consolidation of organisational work including improving Shakhas, increasing training camps, sharing of innovative practices and experiences by representatives of various states and other activities for the coming year. During the 3-day meet, more than 1400 representatives will participate from all over the country and also pass resolutions on important issues. Swayamsewaks working in different areas and sections of society through different organisations are also invited for sharing their experiences and inputs on different issues of National importance. Mahila representatives from Rashtra Sewika Samiti are also invited in ABPS.
Meeting will be conducted by Suresh (Bhaiya ji)Joshi, Sarkarywah Rashtriya Swayamsevak Sangh in the presence of Sarsanghchalak Dr. Mohan Bhagwat
The outcome of the meet and the resolutions passed will be shared on the website.

Sat Mar 7 , 2020
H S Doreswamy is a much-celebrated figure from Karnataka. From being called a Gandhian, freedom fighter the centenarian often treads the path of Left thoughts and is evident from his participation in various protests. The Gandhian freedom fighter is said to have fought British by placing time bombs at their […] 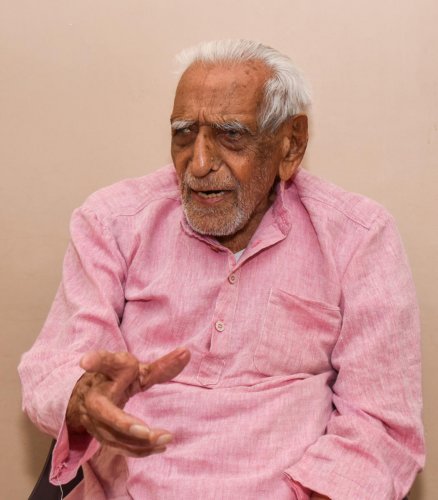