Dr. Chidananda Murthy, Mathada born on May 10, 1931 a great scholar of Karnataka passed away today owing to illness. He was 88. His tremendous contributions to linguistics, epigraphy, cultural history, folklore and history of Kannada literature is fondly remembered by people of Karnataka. He has been in the fore front of Kannada language movement in a truly moral way and worked honestly for the cause.

“A staunch nationalist writer, researcher Dr. Chidananda Murthy is no more and the news pains. He was one who devoted himself for the cause of state, language, culture and Dharma.

Dr. Murthy was vocal on the conversion activities happening in Tirupati and had opposed it. When it came to the the controversial Tipu Jayanti celebrations announced by the Karnataka State, he had proved from history how the tyrant king Tipu Sultan was pro Persian and anti Kannada. Also during the time when the Veerashaiva- Lingayat divide was fostered, Dr. Murthy stood for Hindu dharma stating that Veerashaiva and Lingayat were one and the same and they were undoubtedly part of Hindu dharma thus opposing the divide.

I personally and as part of the RSS condole the death and offer Shraddhanjali to Dr. Murthy” said Sri V Nagaraj who is Kshetriya Sanghachalak of  RSS’ Dakshina Madhya Kshetra comprising of Karnataka, Andhra, Telangana states.

Chidanandamurthy was born in a small village called Hirekogaluru, in Chennagiri taluk of Davanagere district. He had a distinguished academic career and secured his B.A. and M.A. degrees from the University of Mysore. He was awarded a Ph.D. degree for his dissertation on ‘Kannada Shaasanagala Samskrutika Adhyayana’. (Cultural Study of the Inscriptions of Karnataka) This is one of the most admired works of its kind in Kannada). This is a systematic study of the inscriptions from 450 A.D. to 1150 A.D. It is full of insights and throws light on many cultural practices prevalent during that period.

After working as a lecturer in Kannada in a few colleges Dr Murthy joined the University of Mysore in 1960. He moved on to Bangalore University in 1968 and took voluntary retirement from his job as a professor of Kannada in 1990. He has worked as a visiting professor in Chicago University during 1967-68. He has participated and presented papers in seminars held at prestigious Universities in U.S.A. such as Berkeley and Stanford.

His work in many fields of scholarship has been trend setting and path breaking. He is one of the scholars who liberated literary research from its academic boundaries and imbued it with socio cultural dimensions. He could import this outlook to whatever area he chose to work upon. In fact, he is one of the pioneers of inter disciplinary study of literature and culture. Total solar eclipse, Lambani language and culture, religious practices of rural Karnataka are some of the issues that have engaged his mind. He was not keen to confine himself to research based exclusively on literature and writers. His has evinced a keen interest in a socio-cultural analysis of many rituals and practices.

Watch the interview which was brought to you by VSK team where writer, columnist Sandeep Balakrishna had interviewed the author.

During the time when Karnataka government under Chief Ministry of Siddaramaiah announced the celebration of Tipu Jayanti to commemorate Tipu Sultan the ruler of Mysuru, M Chidananda Murthy was vocal in condemning it and fought peacefully against celebrating the tyrant. He had expressed joy and said it was a victory after BS Yedyurappa the CM of Karnataka had decided the decision of not celebrating Tipu Jayanti. Chidananda Murthy had extensively written about how Tipu enforced Persian as an official language in the place where he ruled by ignoring Kannada the local language since long.

Chidananda Murthy is also remembered today for his serene thoughts on Hindu dharma and his comments during the call of separate status of Veerashaiva-Lingayat movement few years back. ‘Basavanna, in his teachings, included Vedic shlokas as examples while preaching his Vachanas. Basavanna is a Veerashaiva and a Lingayat. There was a social reformer named Pandaguli Kesharaja. He was a Veerashaiva. Basavanna was responsible for interpreting Kesharaja’s teachings and simplifying it for people. Kesharaja’s book Ksheeramahatmada Kanda speaks of Veerashaivism. There is no difference between Veerashaivas and Lingayats,” the scholar had opined.

For the past three decades Chidananda Murthy has been an inseparable part of the Kannada language movement and tried his best in fostering the cause of Kannada and Karnataka. ‘Kannadayana’ is an account of his journey on foot from Bangalore to Hampi delineating his experiences and his concerns for Kannada.

Chidananda Murthy has received many awards and honors during his illustrious career. Central Sahitya Academy Award for ‘Hosathu, Hosathu’ in 1997, Rajyotsava Award, (1985) Pampa Prashasti, (2002) Karnataka Sahitya Academy Award (1984), Karnataka Janapada and Yakshagana Academy Award (1993) are a few among them. ‘Samshodhana’ is the felicitation volume presented to him. Recently he was also felicitated at Mangaluru Lit Fest in Nov 2019, for his lifetime achievement in the field of literature, history and language movement.

Dr Chidananda Murthy also participated in a book discussion in the Mangaluru Lit Fest. His book ‘Satyam Shodham Nirbhayam’ was discussed and naturally the track was was crowd pulling.

Watch the interview which was brought to you by VSK team where writer, columnist Sandeep Balakrishna had interviewed the author during the time of felicitation.

VSK Karnataka is not the writer of the whole piece above and is sourced from various references. 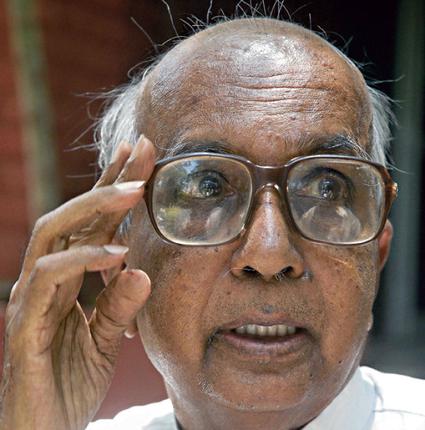