This article was first published in VSK TN page. VSK Karnataka remembers the great philosopher, academician, and statesman who was the first Vice President, and second President of Swatantra Bharat. This article is is a collation of anecdotes from the life of Dr. Sarvepalli Radhakrishnan.

Patted on the cheek of Chairman Mao

Patting powerful men on the cheek seemed to be Dr. S.Radhakrishnan’s  favourite way of disarming them. In the autumn of 1957, Dr Radhakrishnan paid an official visit to China. I (Natwar Singh) was present at his meeting with Chairman Mao Tse Tung. After shaking hands with the almighty Mao, the Vice-President flouted every rule of protocol. He patted Mao on his right cheek. The Chairman was taken aback. All present froze. Dr Radhkrishanan uttered 12 words which melted the tension. “Mr Chairman, don’t be alarmed. I did the same thing to Stalin.” The Vice-President was shown great courtesy and respect. The scholars in China were familiar with his writings. The visit was, by all accounts, a success. (According to K. Natwar Singh, an Indian Embassy official  in Beijing)

In 1949, Dr. Radhakrishnan was appointed ambassador to the Soviet Union. The appointment raised many eyebrows because people wondered what kind of an impression Radhakrishnan, a student of idealist philosophy, would make on Joseph Stalin, an ardent communist. In 1950, Radhakrishnan was called to the Kremlin to meet with the Premier. Radhakrishnan told Stalin, “We had an emperor in India who, after bloody victory, renounced war and became a monk. You have waded your way to power through force. Who knows that might happen to you also.” Radhakrishnan was referring to Stalin’s infamous “bloody” purges. Stalin smiled and replied, “Yes, miracles do happen sometimes. I was in a theological seminary for five years!” On April 5, 1952, a few days before Radhakrishnan’s departure for India, Stalin called on Radhakrishnan. Radhakrishnan records Stalin’s face being bloated. Radhakrishnan patted him on the cheek and on the back. Stalin said, “You are the first person to treat me as a human being and not as a monster. You are leaving us and I am sad. I want you to live long. I have not long to live.” Stalin died six months later. Radhakrishnan’s legacy in Moscow was a firm and friendly understanding between India and the Soviet Union. A relationship which has flourished over the years and has become even stronger. (From a write up by Professor G.Venkataraman.) Ashok Kapur in his book ‘The Diplomatic Ideas and Practices of Asian States,’ writes that Joseph Stalin had refused to meet India’s first ambassador to the country, Vijaya Lakshmi Pandit (Jawaharlal Nehru’s sister). Stalin considered her arrogant and aristocratic and confined her to the Indian Embassy. This had a huge affect on Pandit’s psychological wellbeing. In 1949, the failure of the first ambassador forced Nehru to send renowned philosopher Dr. Sarvepalli Radhakrishnan to Moscow as India’s ambassador. In an eventful three years, Radhakrishnan managed to change the paradigm of India’s relationship with the Soviet Union.

Radhakrishnan  didn’t seem to have had much use for religious rituals or the practice of Hinduism, with which he was often superficially identified. Muhammad Ali Jinnah says to him in the 1940s while on a train: “You are one of my main enemies. You have made Hinduism respectable.”

In 1954, before racial de-segregation, at the peaks of the Eisenhower Republican era, SR spoke to the United States Senate: “No society is static; no law is unchanging; and no constitution is permanent. Given time and patience, radical changes may happen in both in human nature and in systems of society which reflect human nature.”  A young Congressman from Massachusetts sat in the gallery and made notes of the speech.  A decade later, he repeated the very same lines to Radhakrishnan when they met at the White House, by which time the Congressman was known widely as “JFK”.

Patting powerful men on the cheek seemed to be his favourite way of disarming them. He did the same to Mao, who is amazed that somebody could treat him like a young man. Mao’s mandarins, predictably, panicked. He did the same to the Pope, too. (In December, 1964, Pope Paul VI visited India and made him Knight of the Golden Army of Angels, the Vatican’s highest honour for a Head of State).

SR was all For the RSS and NOT the Congress

His Hint  to Proselytisers

There were many interpretations of Indian scriptures and philosophy, but Radhakrishnan was perhaps the first Indian philosopher to present to the world the deeper aspects of Indian philosophy. He was truly India’s cultural ambassador to the world. After listening to him, one English lady was prompted to say, “There is no need for us to send missionaries to India.”

Broadly speaking, philosophers are reputed to be lacking in humour. Radhakrishnan was an exceptionally witty man. The King of Greece came to India on a state visit. President Radhakrishnan (he had succeeded Dr Rajendra Prasad) welcomed him at Palam airport. “Your Majesty, You are the first King of Greece to come to India on invitation. Alexander the Great came uninvited.” 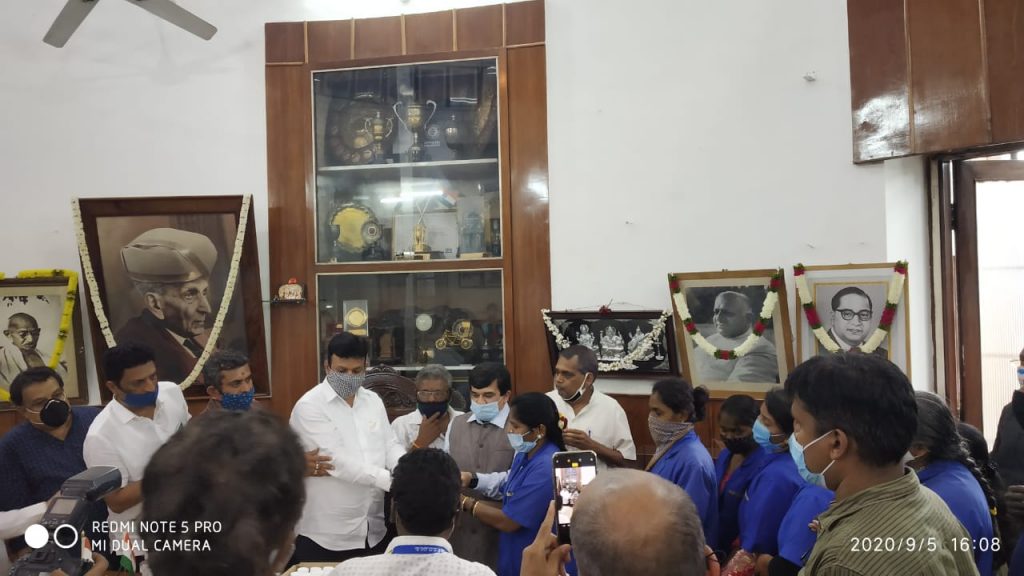