Shri Manmohan Vaidya, Sah Sarkaryavah of the RSS addressed the media at the start of the ABPS 2021 today at the venue in Chennenahalli near Bengaluru. He was accompanied by Shri Arun Kumar, Akhil Bharatiya Prachar Pramukh of RSS.

The ABPS 2020 in March last year had to be canceled due to the Corona pandemic. This year the ABPS was to happen in Nagpur but due to the increase in Covid-19 cases there, the meeting is being held here. This meeting happens every year where we deliberate on the year gone by and plan for the next 3 years. The process of electing the Sarkaryavaha will also happen during the 2 day meet.

Due to the pandemic, RSS Shakhas and other Sangh events had completely stopped between March to June last year. Shakas gradually resumed only in July. However, RSS Swayamsevaks were active from day one in all states of the country in serving the society and help in mitigating the situation caused by lockdown and amelioration lives of those affected. This is the unique characteristic of our Bharatiya society where common citizens gets involved in serving the society whenever the situation arises. In the other countries where the idea of a ‘Welfare State’ is still prevalent, it is the state machinery and administration which takes care of its citizens during such times. In India too, the government machinery along with the medical fraternity, corporation staff, safai karamcharis, police machinery were all active. They worked and served the society during the pandemic beyond the call of duty and in fact many among them lost their lives. India is the only country where the society was equally involved in mitigating the situation along with government and the administration.

RSS Swayamsevaks have always been at the forefront in serving the needy during any natural calamity and disasters. But despite knowing the fact that they can be infected with the virus, Sangh Swayamsevaks served throughout the country during the pandemic. The Swayamsevaks through Seva Bharati were actively involved in various activities during the lockdown.

5 lakh 70,000 RSS Karyakartas served at 92,656 locations in the country. Ration was distributed to around 73 lakh needy and food packets were distributed to 4.5 crore people. 90 lakh masks were distributed and more than 60,000 units of blood was donated. Swayamsevaks have helped more than 20 lakh migrant workers and nearly 2.5 lakh nomadic people have been served during this period. Swayamsevaks have reached out and helped other neglected sections of the society throughout the country.
Other than the RSS, many social organisations including temple, trusts, mathas, gurdwaras, have worked to served the society. This aspect is unique to India. As Gurudev Rabindranath Tagore said we are not a welfare state. The mutual understanding in the society can evolve only after several generations. It is only then that common people come forward out of their own will to serve the society in such times of need even at the cost of their lives.

In India we have the idea of Rashtra which is different from the notion of a nation state, is independent of the political system. Hence, despite centuries of colonial rule, the mutual understanding and maintaining a balance in our society is still intact. This was proven by the way the society came together to serve during the pandemic.

Sangh shakhas have gradually resumed. In comparison to March last year, most of the shakhas have become active again. 89% of the shakhas have restarted and the remaining will resume gradually. Sangh shakhas are present in all districts in about 6495 taluks/khands. Among this, shakhas have become active again in 85% khands. Below the Tehsil level, Mandals comprising of 10-12 villages have been formed. There are 58,500 such Mandals in the country among which active shakhas are present in 40% of such Mandals and contact has been established in 20% of the Mandals. Hence, 60% of the Mandals have been covered either through shakhas or by establishing contact in such places. The Sangh network is expanding throughout the country and in the next 3 years, Sangh aims to reach all the Mandals in the country.

There are 3 categories of Shakas. 1) Students, 2) Those who are earning but below the age of 40 and 3) Those who are above 40. 11% of the shakhas are of a last category, which means that nearly 90% of the shakhas comprise of the youth. 60% of these shakhas are of students and more youth and students are becoming part of Sangh shakhas and activities.
Along with Sangh activities, Ram Mandir Nidhi Samarpan campaign happened across the country. Ram Mandir is not just a temple as Ram is the representative of the cultural ethos of the country. As the then Vice President of India Dr. Rajendra Prasad had said during the Pran Pratishtha of Somnath Mandir in 1951, temples have been the centres of our cultural renaissance. During those times, when banks were not there, temples were the hub of economic activities too due to which merchants from across the world used to come and trade in gold and diamonds. Hence our temples were both the centres of economic activities and representative of our culture. He had said that the task of Mandir nirman will be complete only when India reaches the pinnacle of glory both in terms of economic growth and cultural ethos. In this aspect, the Ram Mandir Nidhi Samarpan Abhiyan became an activity to bind the entire country with the same purpose. Even if one did not believe Ram as Bhagwan, anyone who considered him as the cultural icon of the land became part of the campaign.

Sangh Swayamsevaks were actively involved in this campaign throughout the country. However, the focus of the campaign was not on collecting donations which people gave wilfully, but on reaching out to maximum people and families in the country. We received an unprecedented response and such a massive campaign had not been undertaken earlier.
RSS Swayamsevaks reached 5 lakh 45, 737 locations as part of the campaign. Approx. 20 lakh Karyakartas were involved in the campaign and were able to contact 12 crore, 47 lakh, 21,000 people. The Swayamsevaks reached even the remotest places in Mizoram, Nagaland, Andaman, Ladakh, etc. The goal was to reach every village and approach everyone. The response was very good. The Ram Mandir campaign has been successful in expressing the emotion of unity of the country.
The resolutions that will be passed during the ABPS will be to acknowledge and thank the society which responded positively during the pandemic and the way India helped other countries in mitigating the situation. India has a tradition of helping the world as we have seen in the way we have sent vaccines to 71 countries. Another resolution will be on the unity expressed in the country during the Ram Mandir Nidhi Samarpan Abhiyan.

During serving the society during the pandemic and the Ram Mandir campaign, there was a curiosity among people to know more about RSS. Hence, Sangh Parichaya varg were conducted. Consequently, there has been an increase in the number of people joining and willing to work with RSS. Many people who are eager to work for the sake of society along with RSS have come in our contact. The way to engage and involve such people in building a better society along with expanding and planning Sangh work in the next 3 years will be discussed at the ABPS this time.

To a question on the nature of discussions at the ABPS, Shri Manmohan Vaidya clarified that no political issues will be discussed. Any involvement of RSS in the elections will be the same as the constitutional mandate for every citizen of the country, he specified. 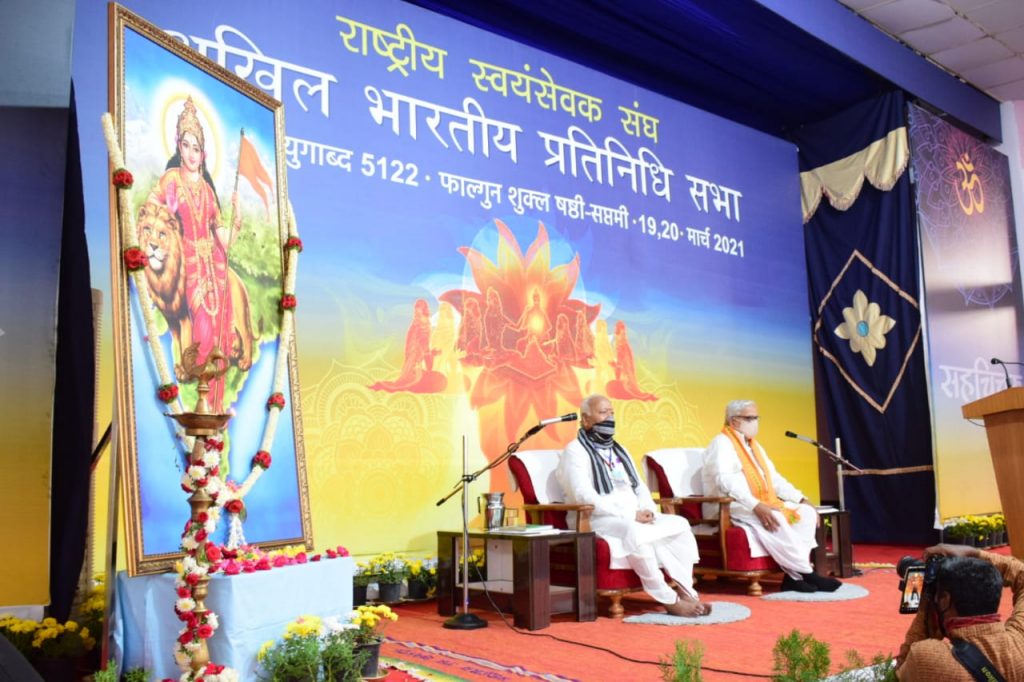