Sri Rajat Sethi spoke today in Disha Bharat’s 15 day lecture series on the eve of 74th Indian Independence Day. Rajat Sethi is Advisor to the Chief Minister of Manipur and author of many books.

Rajat Sethi opined that the history text books in India have only glorified few individuals and select political leaders as torch bearers in the freedom struggle but have grossly ignored the movements taken up the sub altern classes. He recollected his conversation with his grandfather who despite being so far away from the country capital were also part of revolting against the British rule. Rajat said the British empire was a symbol of all social issues in the country then, and without the masses fighting it out with the British many political movements would not have taken the shape and got credits. He urged the audience to pay heed to such social agitations which have taken place in the country during the freedom struggle and voice of masses should never be suppressed. Without masses, the Non co operation moment, Civil disobedience movement, Quit India movement would not have been successful he said.

The socially stable, educated elite were members of the Congress during the freedom struggle and had tremendous political ambitions but the common people sans such political aspiration fought for social economic rights, emancipation. Rajat in his talk outlined that among the masses were, women, farmers, labourers, tribal community who fought fiercelessly against the colonialism. 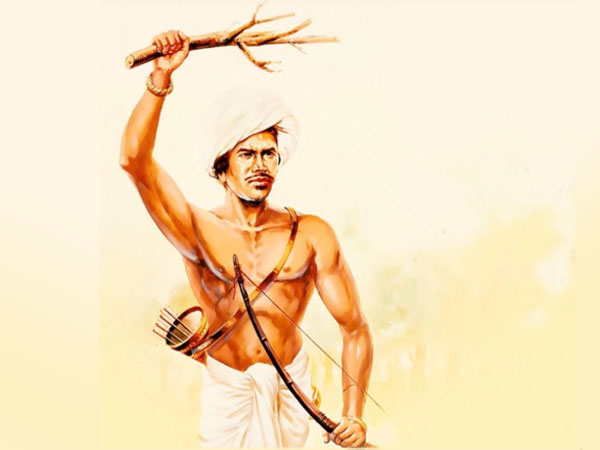 He elucidated the example of Mumbai dock yard workers who had aligned with nationalists to revolt against British and had participated in the Swadeshi movement. Though the law existed to not form trade unions the Dock union was formed he said. The efforts like those were not to revolt against the bourgeoisie like what the Communists have practised and preached, but was for the grand cause of the nationalist and Swadeshi movements he added.  The British who were well versed in dividing the society’s unity had looked down upon the tribals. They were considered “uncivilised”, “savage” and British felt they never needed to be respected, declaring them not worthy of cultivating their lands too. The tribals were forced to convert to christianity to study in the missionary schools. There were many tribals who have fought against the British and their leaders are not celebrated in India he said expressing his pain. One such tribal leader who adorns inside the Indian Parliament was Bhagwan Birsa Munda he said. Culturally attacked and converted Birsa showed his aggression against the British and was quite successful in stopping the Christian conversions he said.

The British had also brought laws which were regressive to farming community. The farmers were not allowed to cultivate what they had practised for generations. Phulaguri dhawa (stoppage of opium cultivation) was an example for the same he said. The Thekedari system largely assuming the land ownership under them allowed others to cultivate lands to get more yield had enraged the tribals and farmers he said. Such losing control of ancestral property resulted in revolts. Tribals from NW Frontier province, Bheel, Koli, Santhali, Chota Nagpur, Kondumals revolted in their own ways against British
The Anglo Kuki war was a resultant of the Kuki tribes in Northeast who had opposed the menial work in Imperial Army’s Labour Corps he explained.

Rani Gaidinliu at her early age had plunged into into freedom struggle in a cultural way. She had protested against the American Baptists who were in the North east primarily for conversion of the Naga tribes and “civilise” them through it. Gaidinliu proposed indigenous way of living and going back to spiritual, cultural ways through Heraka movement opposed the conversions strongly. Though she was resisted by her own people, she managed to raise donations to build guirella against the British. She was imprisoned for life and released only during 1940s after 14 years of jail he remembered.

Young, ambitious common men stood as brave symbols of resistance and it is the need of the hour to remember them he concluded.