18th, May 2019, Bengaluru: On Saturday, hundreds of Bengali Doctors, IT Professionals, Engineers, Scholars, Musicians and Authors assembled at historic Bangalore Town hall for a very unique protest that was organized by a citizen’s forum called ‘Save Bengal, Bangalore’. Bengalis who live in Bangalore has been voicing their grim concerns over the ever-growing atrocities on the Hindu community in Bengal. A massive protest in the year 2017 was organised when Basirhat Riot happened in Bengal. This  protest was specifically against the heinous crimes perpetrated against the Hindus in the Satgachia Assembly Constituency area in Diamond Harbour, West Bengal.

Organizers briefed the media and the crowd about the atrocities those were planned and executed on the Hindu community of Nahajari Village, Bishnupur Block No-2, Alipur Sub Division of South 24 Pargans.

According to the organizers there is an unprecedented situation in Bengal today which can only be compared to the situation in Kashmir of early 90s. This act of terrorizing people and atrocities started on 10th May night. Hindu properties, shops, cars were vandalized, looted and finally, burnt to ashes. According to the eye witnesses and victims – ‘Specific Jihadi announcements were made from Masjids in the area asking Hindus to vacate their homes and leave the area’. As, a result hundreds of Jihadi Muslims gathered with country made bombs, pistols, lathis and swords and ran havoc on the Hindu lives of the locality without any mercy. Victims of the Hindu community belongs to all political party, but the have same religion ‘Hindu’ as claimed by the victims.

In this unprecedented ethnic violence, more than 50 shops belonging to Hindus were looted and burned. And, finally police administration was forced to send RAF to bring the situation under control and they were also attacked with country mad bombs, pistols and stones. In this attack, IC of Maheshtala Police station also got injured badly. Even, many police vehicles were also damaged. Hindus are fleeing the area as we report to save modesty of their woman and save their lives.
All premier Bengali media channels suppressed this horrific ethnic riot for some unknown reason. Though one of the leading Nation News Channel – TimesNow has covered the incident. There are many eye-witnesses shot videos are available in social media as well. Eminent journalist Swapan Dasgupta, Rajya Sabha MP has already voiced his concerns about the incident.
All eminent Bengalis who gathered at the Town Hall have taken a vow to stand by the riot victims and also to assist them with legal/financial assistance.

Looking at current geo-political scenario, it seems that Bengal is staring at a new ‘Renaissance’ that is being steered by the distinguished Bengalis living in Bengaluru. 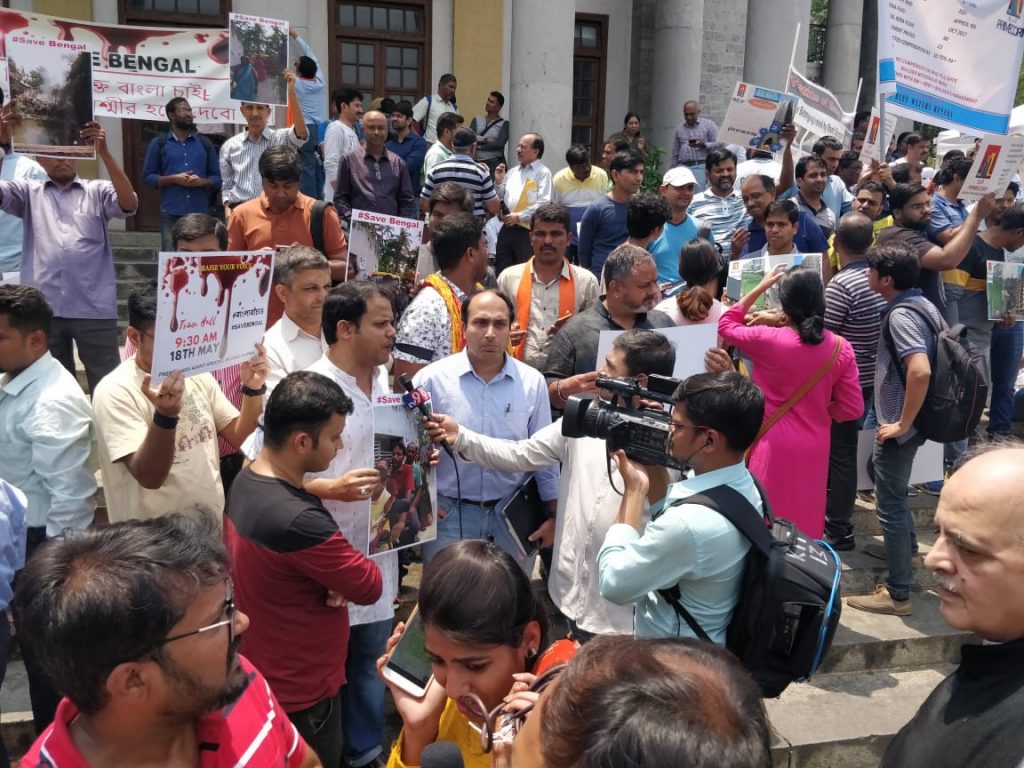 Dr Upendra Shenoy, a person to be remembered forever: Thinkers