End of an era when ‘doosra nishan’ prevailed

End of an era when ‘doosra nishan’ prevailed.

Read the special article on “doosra nishan”, the State Flag of JK. It was hoisted for the first time on June 7, 1952. Though doing away with ‘doosra nishan’ took several decades, today we stand successful.

When the Constituent Assembly of Jammu and Kashmir met on June 7, 1952, there was palpable excitement all around. This day was very special as it was chosen by National Conference leader Sheikh Mohammad Abdullah to move a resolution which was sure to take his own stock soaring among his supporters.
The resolution pertained to the adoption of a separate flag for the state of J&K, now a UT. It was on this day that this flag was adopted and hoisted anywhere in the country for the first time. Sheikh was Prime Minister of J&K, just as his friend, Jawaharlal Nehru was the Prime Minister of India.

We thus already had two PMs in the country, and the preparations were on for creating a separate flag for the state. A separate constitution was simultaneously being drafted for J&K, long after the Indian Constitution had been applied throughout India on January 26, 1950.

The nation was thus moving in the direction of “2 Pradhan, 2 Nishaan, 2 Vidhan”.
Sheikh rose in the House as the session began, and said: “Resolved that the National Flag of the Jammu and Kashmir State shall be rectangular in shape and red in colour with three equidistant vertical strips of equal width next to the staff and a white plough in the middle with its handle facing the strips. The ratio of width to the length of flag shall be 2:3.” 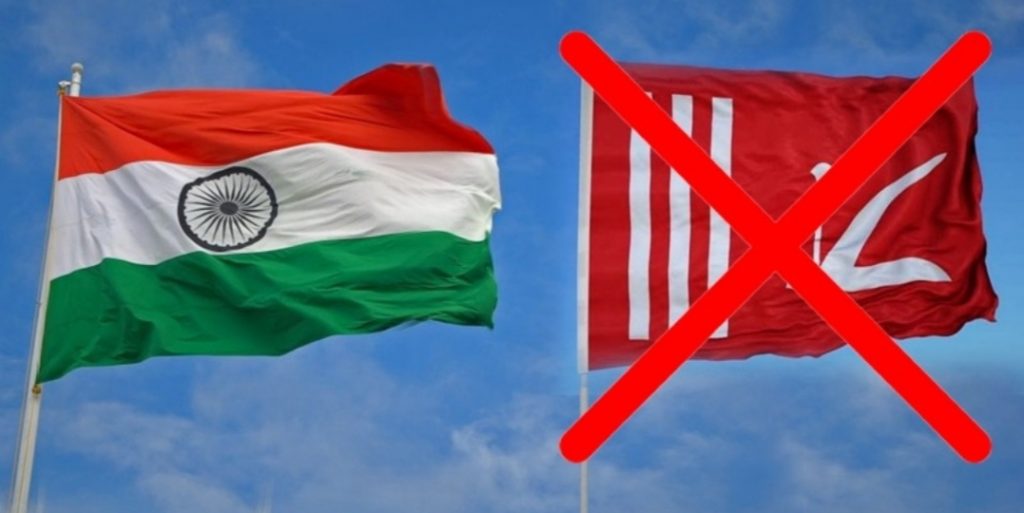 This angered nationalist people all across the country as it was taken as the Sheikh taking another step towards promotion of separatist “special” feeling among people of J&K.
Shyama Prasad Mukherjee, the founder of Jansangh, was vehemently opposed to granting more and more incremental concessions like this. He cautioned Nehru that this would only make Sheikh prone to becoming headstrong and challenging the sovereignty of India.

It was precisely against this tendency of fanning soft separatism that he had given the slogan of “Ek Desh, Ek Nishaan, Ek Pradhan”. Nehru had already done enough damage to the nation by introducting Article 370 into the Constitution at the last moment, Mukherjee felt.

On August 5, 2019, Prime Minister Narendra Modi’s government initiated constitutional changes which abolished Article 35 A and neutered Article 370. Between June 7, 1952, and that day in August last year, the separate flag of J&K continued to be hoisted atop government buildings, vehicles, embossed on all printed material. That day, its death knell was sounded as the Constitution of J&K became a relic of the past, and got consigned to history.

The last rites oe the concept of “2 Nishaan, 2 Vidhan” were conducted that day as Union Home Minister Amit Shah moved the relevant papers in the Rajya Sabha. The opposition was stunned by the alacrity with which the whole thing was handled.

In 1952, the adoption of a separate flag by J&K incensed Praja Parishad workers led by Pandit Prem Nath Dogra. The party had strong presence all over the Jammu region, and it had been deliberately marginalized by Sheikh-Nehru duo. At the national level, Mukherjee lent support to the movement for scrapping of “2 Pradhan, 2 Nishaan, 2 Vidhaan”.

Reverting to that fateful day in 1952, Sheikh justified a separate flag as “the symbol of all the desires and aspirations”. He said: The plough is a symbol of the peasant and thus forms the salient feature of the flag. The second salient feature in this flag is its red colour. This colour represents workers and labourers.

In his brief speech, Abdul Gani Goni, who was Parliamentary secretary said “we consider it proper to adopt a national symbol”. So, both from Sheikh’s resolution and Toni’s statement, it becomes clear that the separate flag was a clear attempt to create “a nation within a nation”.
In the same manner, Bakshi Ghulam Mohammad, said: “This is the flag we are giving to the nation as a national trust and all of you, friends, are trustees. Some other members also participate in the discussions supporting the resolution. They all used the word “nation” conspicuously in all their references. It had sinister implications. One member, however, stood up and moved an amendment to remove the word “National” from the resolution.

On pursuing Constituent Assembly debates, we find that it was Mir Qasim who submitted a dissenting note. As he moved his amended motion, he said: “That the words NATIONAL occurring before the word FLAG in the first line of the resolution be deleted.” His amendment was seconded by Sardar Harbans Singh Azad.
Interestingly, Sheikh Mohammad Akbar recited the poem of the flag to the house. An English translation of the song adopted by Radio Kashmir, Annual 1951, was also read on this occasion. Towards the ending stanza, it read:
May it fly forever
In every nook and corner,
Till the day of the Judgement.
May I behold Thee!
Those who sang the poem in unison that day sure did not count upon August 5, 2019, as the Judgement Day! Not in their wildest dreams could they have imagined that some day, decades later, Mukherjee’s call for “Ek Pradhan, Ek Nishan, Ek Vidhan” will be redeemed. That Sheikh’s “National Flag” will be lowered and only the true national flag, the Tricolour, will hold sway all through India.