History of the nation is based on the people who have sacrificed their blood :Minister Gen V K Singh at Launch of Kannada book, Samara Bhairavi

by Vishwa Samvada Kendra
in Articles
248
0

24 Aug 2019, Bengaluru : A Kannada book titled Samara Bhairavi was launched in a packed Town Hall Auditorium in city today . This book is considered as the first book in  Kannada  on the topic of soldiers written in great detail. The book is written by senior journalist, Columnist and editor of Aseema Sri Santhosh Thammaiah published by Sahitya Prakashana. Sri B L Santhosh has written the foreword and Finance minister Smt Nirmala Sitaraman has written the back cover blurb for the book. 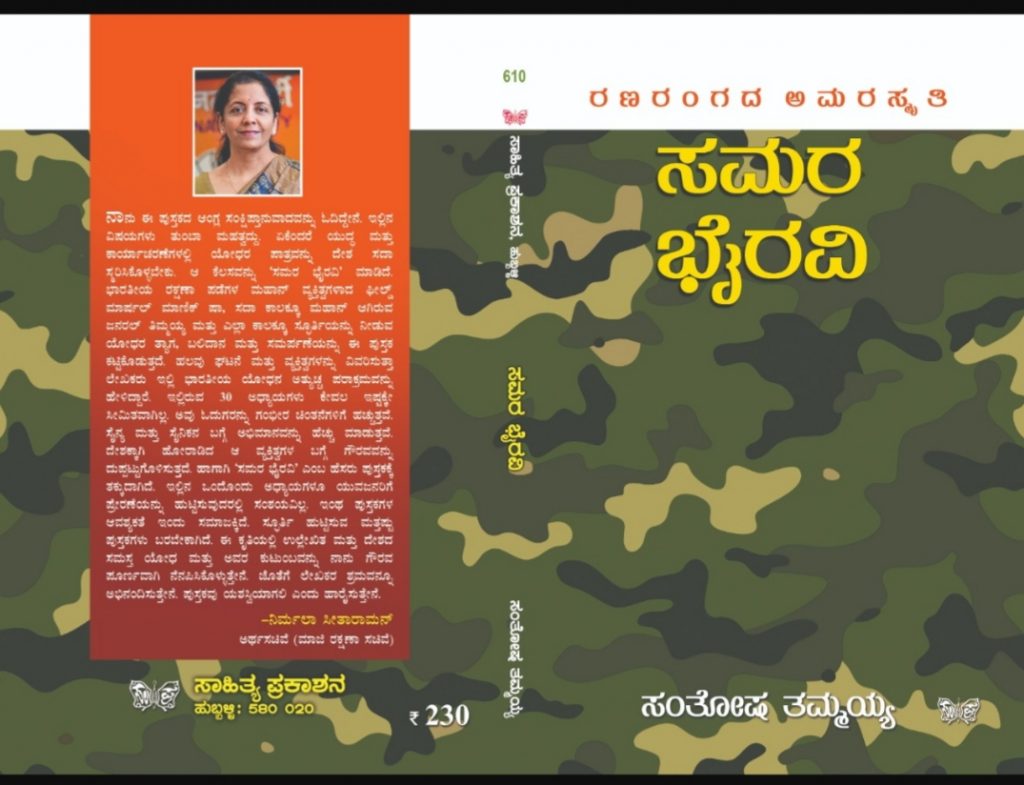 Sri  Santhosh Thammaiah is the recepient of Be Su Na Malya journalism award given by Vishwa Samvada Kendra, Karnataka this year.

Senior Journalist, Ajit Hanumakkanavar who spoke about the book and its content said Santhosh Thammaiah has designed an excellent book which also answers the question of what soldiers are engaged in when there is no war like  situation. The soldier and doctor are remembered only when there is a dire need. Samaria Bhairavi is such a book that documents the life of soldiers who have given their lives for the sake of the country said Ajit.

Demoralizing the values of the nation and creating the conscience of guilt in the mind of soldiers thus demonizing the armed forces is strategically planned in a large scale in Bharat which could lead to tougher problems over a period of time in the nation Ajit added.

General V K Singh, who is a MoS for Road Transport in his address said the history of the nation is based on ones who have given blood to protect it. Courage is always in the mind of Indian soldier and duty for him is everything and thus courage and fortitude of our soldiers is unmatched he said. Speaking about Kodagu which has given the nation a large number of warriors he also remembered the Nationalist and magnanimous attitude of Field Marshal K M Cariappa who also hailed from Kodagu. Gen V K Singh said teaching the youth the stories from our country’s history is the need of the hour and strongly believed the book Samara Bhairavi would do the job of the same. 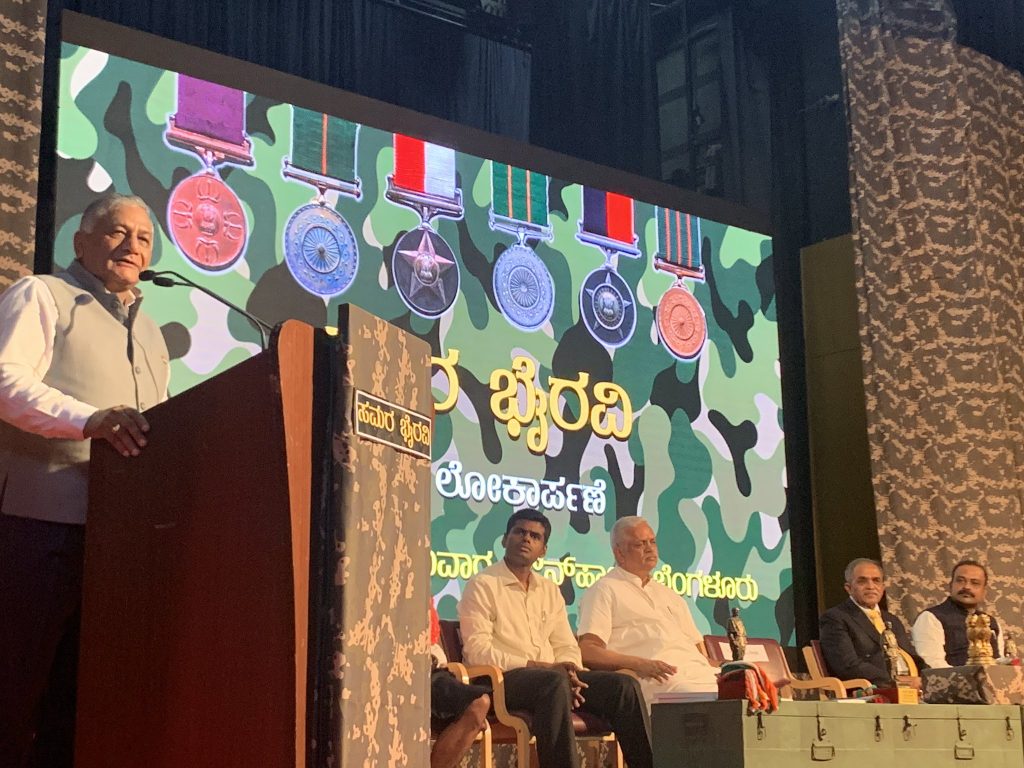 Lt Col. PS Ganapathy, a recepient of the prestigious Maha Vir Chakra also shared his thoughts. He opined that soldiers are educated like anyone else and are from from cities, villages and it is family values, and the extra bit of patriotism which made them get into armed forces.

Territorial integrity and sovereignty of the motherland is utmost important for a soldier, and his self comfort is least important to him which makes the role of soldiers the noblest one he added.

Lt Col. PS Ganapathy urged the parents to have their children learn in Sainik schools to learn the discipline, to get the  taste of military  and allow them to serve the nation by joining armed forces which would to make them proud later.

K Annamalai, IPS and former DCP(South) of Bengaluru grieved that the bravery of armed forces is less celebrated in South India. Though it is very clear that they are our real heroes, we often miss respecting them he said. He rightly opined that armed forces is one Instutuion which has never failed the nation.

Attributing the brave decisions taken in the country recently to the strong borders, he said the Government is in the position to take good, courageous decisions as it has the confidence the borders are safe.: IPS Annamalai, Former DCP 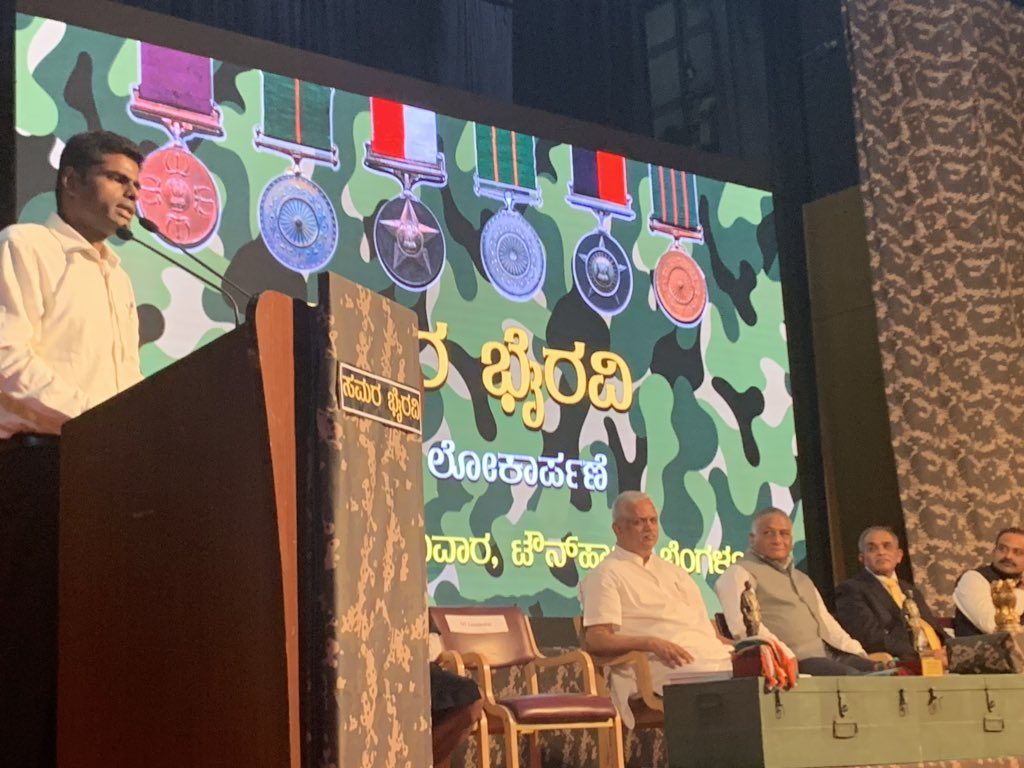 He reminded the audience of few Thirukkural composed by Thiruvalluvar 2200 years ago on the qualities of Army being Valour, honour, leadership and trust.

Annamalai recollected the day when he resigned as SP and a soldier called from Noushera  sector showing his dissatisfaction on the resignation who said they at the borders were saving the nation with the belief that people like him will take care of our families.

BJP’s National General Secretary, Organization, Sri B L Santhosh congratulating the author Santhosh Thammaiah said he was in the league of those erstwhile editors of Aseema, Sonda Narayana Bhat and Narayan Shevire who have written thought provoking articles and editorials. He termed them Akshara Kshatriya or warriors with  the Pen. In his address he asked the audience to refrain themselves from reading this book as yet another work but read it with passion to respect the forces. He also termed that reading the book though qualifies  towards respecting the forces, it should not stop there. Spending the day with the families of men in uniform would be more treasuring than a vacation he insisted. Understanding the soldier, his sacrifice and his conviction that nation being first for him at all times without an iota of selfishness could change the way we could start behaving in the society he opined.

He condemned the previous government which wanted to take an account of the caste of soldiers and the chiefs of Army, Navy and Airforce had in unison rejected such a request. Our caste is that we are all red blooded was the firm reply from the chiefs he said. BL Santhosh also criticized the politicians and alleged intellectuals who were busy finding the caste of the Martyrs of Pulwama as well statements like poverty leads people to join armed forces.

He lambasted Pandit Nehru, on his policies towards the armed forces, and how he always underestimated the latter. He reminded the audience that Pandit Nehru and VK Menon the then defence minister had on record said we could bring a foreigner to lead our armed forces as ours was weak.

Speaking about Human rights in Kashmir, he said the soldiers who were at the receiving end of stones by the civilians did not think about it when they had to rescue them who were stranded during floods a couple of years back.

We are from the society which prays to  deva(God) and aims to eventually attain Daivatwa,(Godliness). Similarly our respect to soldiers should result in we becoming them : B L Santhosh 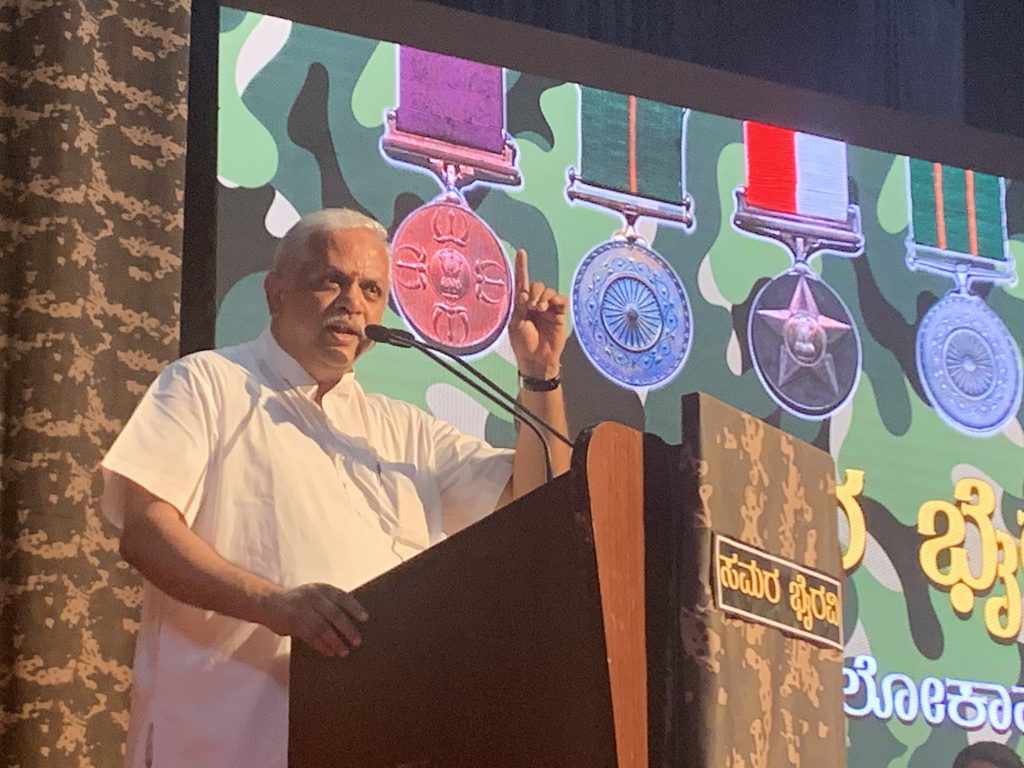 He concluded by citing the popular Major Sandeep Unnikrishnan incident during Mumbai attack where he led from the front and sacrificed his life to protect his team and ensure the end of terrorists. Bullets for a soldier is found in his heart and not in his back he said.

The event started with issuing condolences to Former Union minister Sri Arun Jaitley who passed away today. A minute of mourning was observed.

A special Kodava  performance called dudi which symbolizes the courageous land and the sacrifice of its people kicked off the event.

While introducing the guests on the dais, Author Santhosh Thammaiah felt thankful of his shaping of career by Pracharaks of RSS and he was indebted to them.

Families of martyrs like Lance Naik Hanumantappa Koppad who passed away in Siachen Glacier, CRPF soldier H Guru who laid his life in the recent brutal Pulwama militant attack, Ponnampet’s martyr Savin, Naik Thimmaiah were paid respect on the stage by the honourable guests. 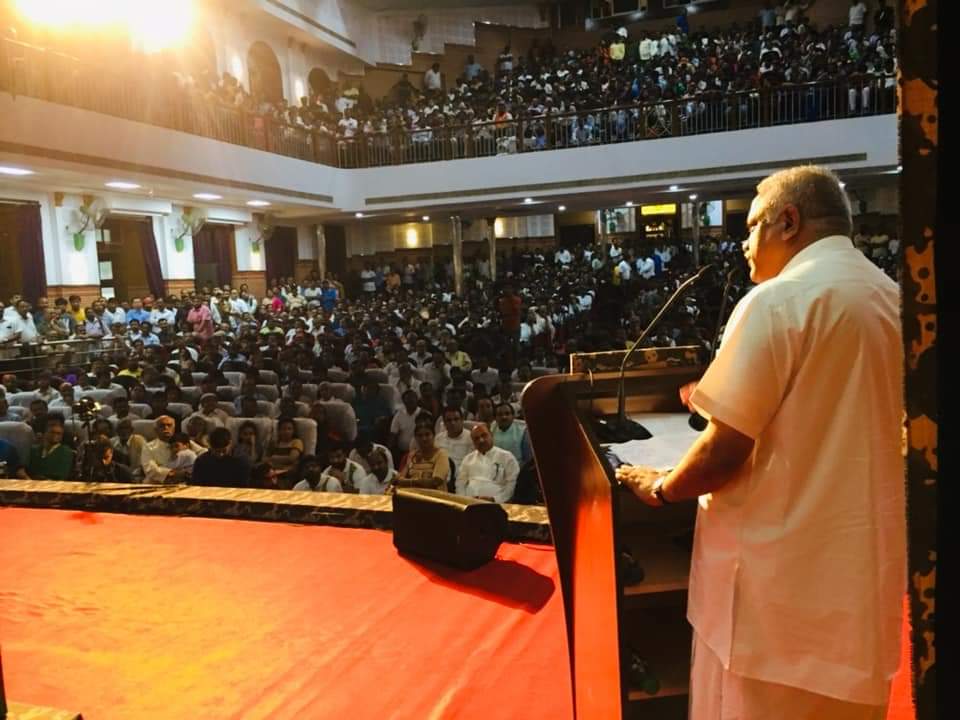 MEN of STRAW: by Tarun Vijay