Hyderabad Aug 24: Samachar Bharati conducted a seminar on “Swamiji ‘s Dreams of Bharat-Role of Media “ on 24th Aug 2013 at the Marriott Hotel ,Hyderabad on the eve of the 150th Birth anniversary of Swami Vivekananda. This seminar was inagurated by Justice L.Narsimha Reddy of the AP High court. Justice Reddy called for a closer reading of Swami Vivekananda’s message and it’s appropriateness for our current times. He stressed the need for ethical and moral education to be inculcated in the youth to bring in a sea change and character building shall go a long way to avoid many a pitfalls plaguing the society. 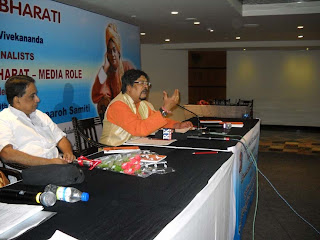 Mr Chandan Mitra ,Editor Daily Pioneer New Delhi and Member of Parliament (Rajys Sabha)who was guest speaker on this occasion stressed the continuing relevance of Swami Vivekananda and said his ideas were far ahead of their times.He said Swami Vivekananda taught on both broad and very deep aspects (not restricted to India alone) encompassing Spiritualism, Universal values, Religion, Character building, Education, Spirit of Service and Social issues.His teachings influenced contemporaries, inspired innumerable followers .He played a major role in introducing India and her spiritual culture of Vedanta to the Western world and in reviving & refining Hinduism within India. Moreever it was Swamiji who restored the self esteem of the Indians which was denigrated by colonial British. He appealed to the media to be truthful,fearless and also upright to the right cause as taught by Swamiji.One of the most significant contributions of Swami Vivekananda to the modern world is his interpretation of religion as a universal experience of transcendent Reality, common to all humanity. Swamiji met the challenge of modern science by showing that religion is as scientific as science itself; religion is the ‘science of consciousness’. As such, religion and science are not contradictory to each other but are complementary.This universal conception frees religion from the hold of superstitions, dogmatism, priestcraft and intolerance, and makes religion the highest and noblest pursuit – the pursuit of supreme Freedom, supreme Knowledge, supreme Happiness.
Mr MV.R.Shastry Editor,Andhra Bhoomi said ” For over twelve years from 1890-1902, amidst much hardship, suffering and personal humiliation, Swami Vivekananda toured all over India and to several places abroad as itinerant monk, preaching and working on diverse problems. . His main teachings may be summarized in terms of his views on Education, Religion, Character building, Womanhood, Hinduism, Spirit of Service and National Integration. He also remarked had he existed in the relevant times he would have been dubbed “a communalist”.Swamiji believed not only in universal toleration but we accept all religions as true and never derided other.
Smt Nivedita Bhide Vice-President of Vivekanada Rock Memorial Kanya Kumari who also participated on this Occassion recalled the services of Eknathji Ranade the founding father of the memorial who believed that as the Vivekananda Rock Memorial was a national monument, The twin objectives of Vivekananda Kendra are man-making and nation-building. With great foresight, Shri Eknath Ranade decided that Vivekananda Kendra was to be a cadre-based organisation. Young men and women whose hearts long to serve the nation would be provided the opportunity and the right platform to serve God in man. She recalled the futile efforts made by the Christian Missionaries in the past to discredit Swami Vivekanda and Swamiji withstood all the onslaughts with aplomb and challenged to make Bharat more glorious than ever before.
Justice Sri Ramlu of the AP High Court (Retd) summed up Vivekananda’s version of “spirituality” was pragmatic and robust. Centuries of oppression, poverty and obscurantism had crushed the Indian spirit. What we needed first and foremost, was inner strength, a confidence that could help achieve our potential. Another great contribution of Swami Vivekananda was to build a bridge between Indian culture and Western culture. He did it by interpreting Hindu scriptures and philosophy and the Hindu way of life and institutions to the Western people in an idiom which they could understand. He made the Western people realize that they had to learn much from Indian spirituality for their own well-being. He showed that, in spite of her poverty and backwardness, India had a great contribution to make to world culture. In this way he was instrumental in ending India’s cultural isolation from the rest of the world. He was India’s first great cultural ambassador to the West.
Sri Raghavendra, Treasurer, Samachar Bharati proposed the vote of thanks.

'Reforms in Education System is need of the hour': Goa CM Parikkar at Intellectual Meet Bangalore

Photo Gallery: Na Krishnappaji – A Memorable Personality of all time in RSS Karnataka