“We stared the event with recitation of Vaishnava Janato which means that we have to empathize and respond to others difficulties, a quality which Gandhi ji practised and proliferated. Gandhiji is remembered by every Swayamsevak every day in the shaka while reciting Ekatmata Mantra. When Gandhi visited a RSS camp he was pleasantly surprised to see that there was no discrimination of any sort. Sangh has always adhered to creating a society that is free of any discrimination. RSS has also been instrumental in making Satyagraha successful. There are many like Vinobha Bhave, H Narasimhaiah and Others have dedicated their lives to live a Gandhian life. We have to ponder upon materializing Gandhi ji principles of Gram Swarajya simple living. We have to think if we can utilize natural resources only as much as required as Gandhi ji opined. The success of Antyodaya as envisioned by Deendayal Upadhyaya has to be understood by everyone in the society. Recently the success of Swatch Bharat shows that with people’s participation Gandhi ji’s ideals can be implemented successfully. RSS too has been an active participant in many Gandhian initiatives and I wish that we “, said Dr Jayaprakash.

Excerpts from Shri V Nagaraj’s speech on the occasion:

” October 2nd is special for 2 reasons. It is the birth anniversary of both Mahatma Gandhi and Lal Bahadur Shastri. I start my speech by offering my respects to them.

Mahatma Gandhi had spoken from this very dais in July, 1927. Gandhi had visited Karnataka 5 times. After he returned from South Africa, he was invited to visit Karnataka by Kannada’s foremost writer DV Gundappa for the inauguration of Mysore Social Service League.

Nations and countries the world over are dynamic and not static. This is due to the internal strength of the society. It is due to this inherent strength we get to witness great thinkers and philosophers like Buddha, Mahaveer, Kalidas, Bhavabhuti, or great leaders like Hakka-Bukka, Krishnadevaraya, Ranjit Singh, Shivaji and many others being born on this land. Whenever the society faces difficulties, it is due to this internal strength of the society that great personalities are born. In this lineage we had MK Gandhi who fought for our freedom and secured it too. He also envisaged an ideal society for us all in the future.

Role of their mothers have been paramount in the lives of all these great personalities. Gandhi ji’s mother too played a great role in his life. He went to South Africa to pursue law but also strived for delivering justice to those who were aggrieved by the colonial rule there.

Gandhi considered Gopal Krishna Gokhale as his guru. When he asked Gokhale about entry into politics, he had said that he must indulge in spiritualized politics. Bhagavad Gita, Isavasya Upanishad bore a deep imprint on his mind. He In fact wrote a treatise on Gita. He lived a life as he preached. He practised the values from very early in his life. He was a shraddhavanta (faithful) and prajnavanta (Conscious) Hindu. We can also see the views of Swami Vivekananda in his speech and writings. The same can be found in the views of RSS founder Dr Hedgewar. This is because they are inspired by the Sanatana views of this land. It is in this background I will speak about the importance of Gandhi ji.

The British were very powerful but Gandhi had the confidence to take them on and also involve common citizens including women in his fight for freedom. His weapons were Satyagraha and civil disobedience. Martin Luther King adopted the same measures in US too.

He laid lot of stress on vyakti (individual) and samaja (society) and the interdependence of the two. This was also inspired from the age old values of our societies. The difference between man and animal is man’s adherence to Dharma. Swami Vivekananda said that his life was a man making mission. A man should evolve by overall development based on dharma. RSS too strives to man making on these very principles. Gandhi ji opined that man should evolve both in the mundane and spiritual. This is also what RSS believes in. He strived for a society that is bereft of discrimination and RSS too works for the same. We see many such similarities between Gandhi and the values of RSS.

The western societies worked thought Greatest good of the greatest number but what we strive for is a ‘sarvodaya rashtra’(progress of all) and not just a welfare state. He called for social equality. There should be no discrimination based on caste, creed, religion and status. Dignity of labor is also a principle he strove for. He was also against untouchability. While he started Young India for a forward looking India, he started Harijan to drive the message of social equality. Along with struggle for freedom he was also active in reforming the society. He used to visit Harijan colonies. When he visited Mythic Society in 1927 he spoke on untouchability and called for research on the same based on our shastras. In another instance, when some of the ashram inmates opposed the presence of Harijan couple in the ashram, Gandhi had said that he will reside with them and not in the ashram. This showed his seriousness in tackling the menace of untouchability. When Gandhi and Dr Ambedkar visited RSS training camps they were very happy to know that everyone irrespective of caste and creed stayed and trained together and expressed their happiness over the same.

Gandhi was also concerned over the economic situation of India and thought about economic reconstruction. He called for creating a economic model where everyone has equal rights on all resources. He said that our economic model should be based on the conditions prevalent here and not emulate a alien model which will not suit us. He wrote about this extensively. We have seen the damage a imported economic model has caused us in the last 70 years. He wrote in Young India that we do not need mass production but production by the masses. He also called for judicious use of natural resources. He famously said the nature provides for man’s needs not for his greed. The British destroyed local industries to sell their mass produced goods. This is happening today too by big economies. Gandhian economics is the need of the hour today. 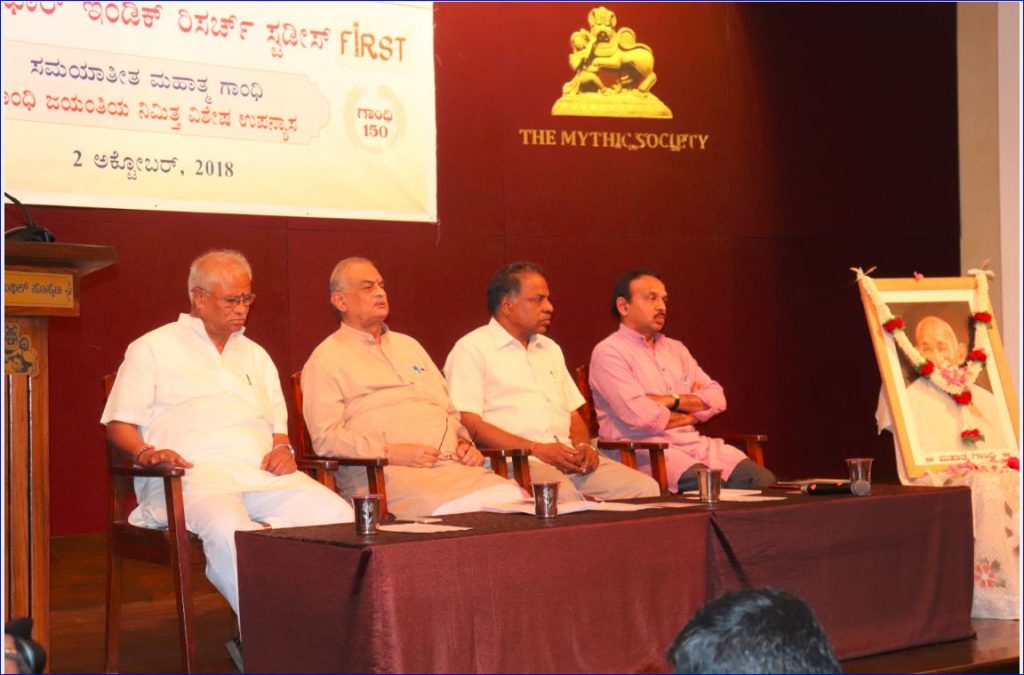 He was also of the opinion that a village has to be the centre of our economic model. In his concept of Gram Swarajya he called for creating a self sufficient villages which will provide jobs and also stop migration to cities. His ideals of Gram Swarajya is the inspiration for RSS taking up welfare of villages.

On education, Gandhi wrote that basic education should be given to a child for 7 years and in the mother tongue. The child should be taught skills that will make him self sufficient and not be dependant on others for jobs. Students should also be provided with ethical education right from the young age. They should also be involved in community development so that concern for society is inculcated in them wrote Gandhi ji. If students are not taught to think for themselves they would become mere humans who would take orders and work. His strong views on role of mother tongue in education is very important.

While speaking on the meaning of true Swarajya he said merely throwing the British away will not be useful. Unless we win over the lacunae prevalent within we will not achieve true freedom he said. Complete independence is still far away he wrote citing the faults we have within. Swami Vivekananda, Deendayal Upadhyaya and Doctor ji who found RSS too have said the same.

Gandhi ji warned us against the 7 ills that would weaken a society and should not be present. They are: Politics without principles, earning wealth without work, commerce without ethics, education without character building, pleasure without conscience, science without humanity, worship without sacrifice. Great personalities who took birth on this land talked about these very same principles which are based on the age-old values of this land. We can offer real tribute to Gandhi ji only by following his footsteps and adhering to the principles he stood for. ”

Shri Dinesh Hedge offered the vote of thanks on behalf of FIRST.

Watch the video of the talk here 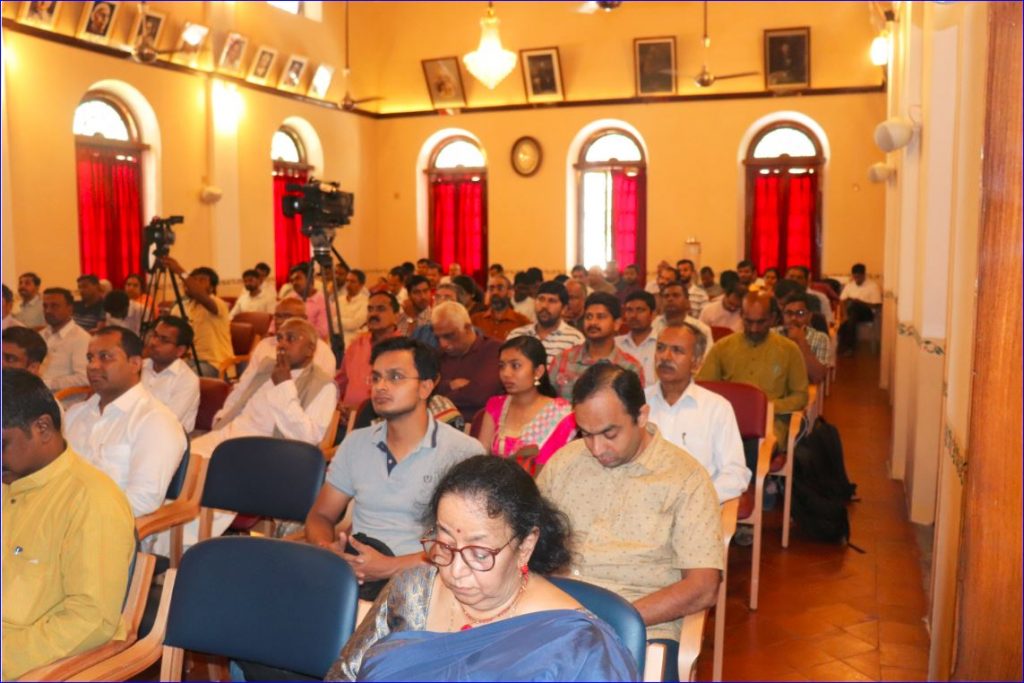 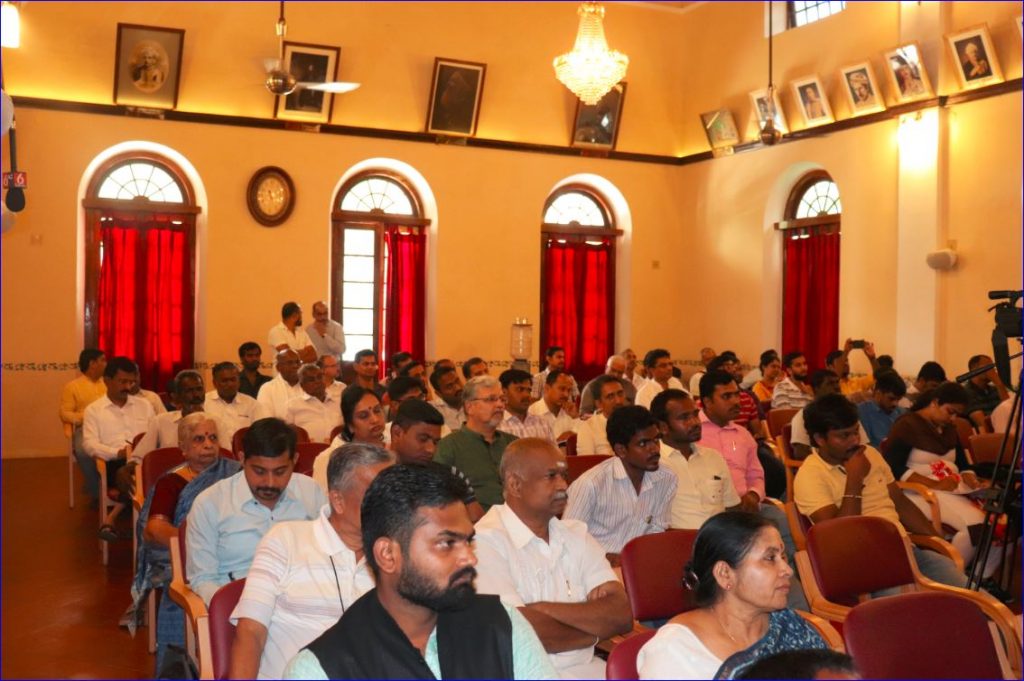 Tags: Gandhi 150 talkGandhi ideals and RSS work are not parallel they convergeRSS and gandhiV nagaraj address on mahatma gandhi

RSS to Support all Kinds of anti-corruption movements, even Advani’s yatra against corruption.