3rd Mar 2018, Bengaluru: A demonstration against rising culture of crime in Bengaluru was organized today under the banner of Citizens for Democracy at Town Hall. The demonstration received huge support from concerned citizens and prominent personalities from various fields. The demonstration started with showering of flowers to the portraits of Mahatma Gandhi and Dr BR Ambedkar by the dignitaries present on the occasion. A soulful song ‘Raghupati raghava rajaram’ was sung by Smt. Shailaja and famous singer Shashidhar Kote at the beginning of the event. The entire program was conducted by Smt. Parimala. 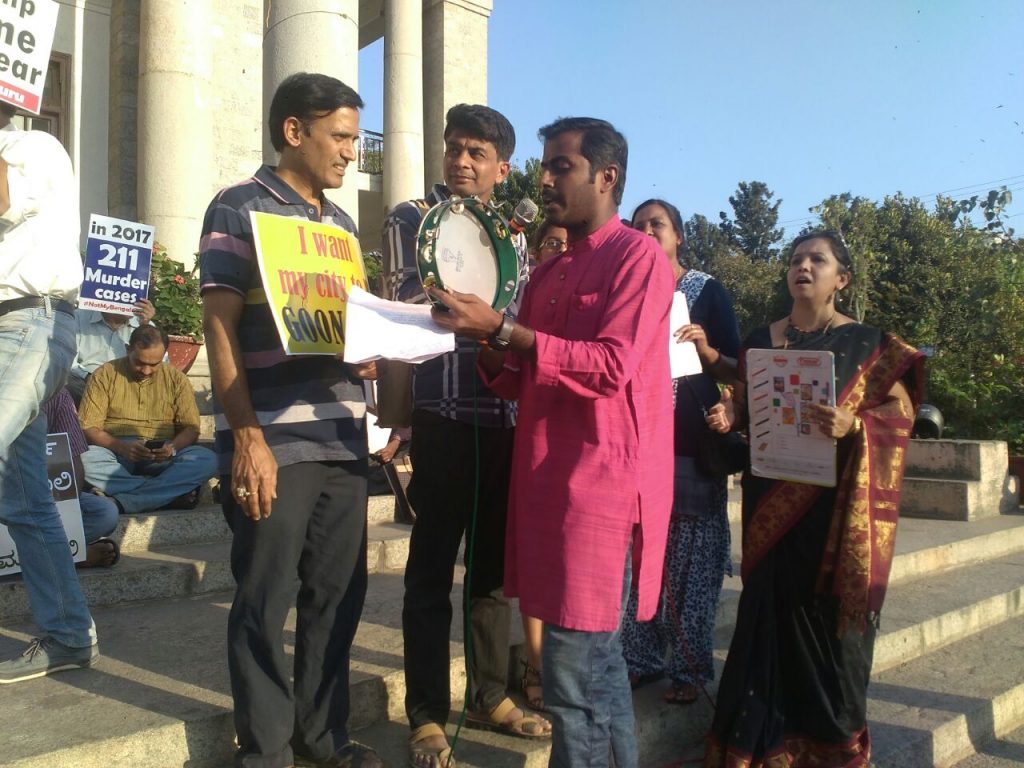 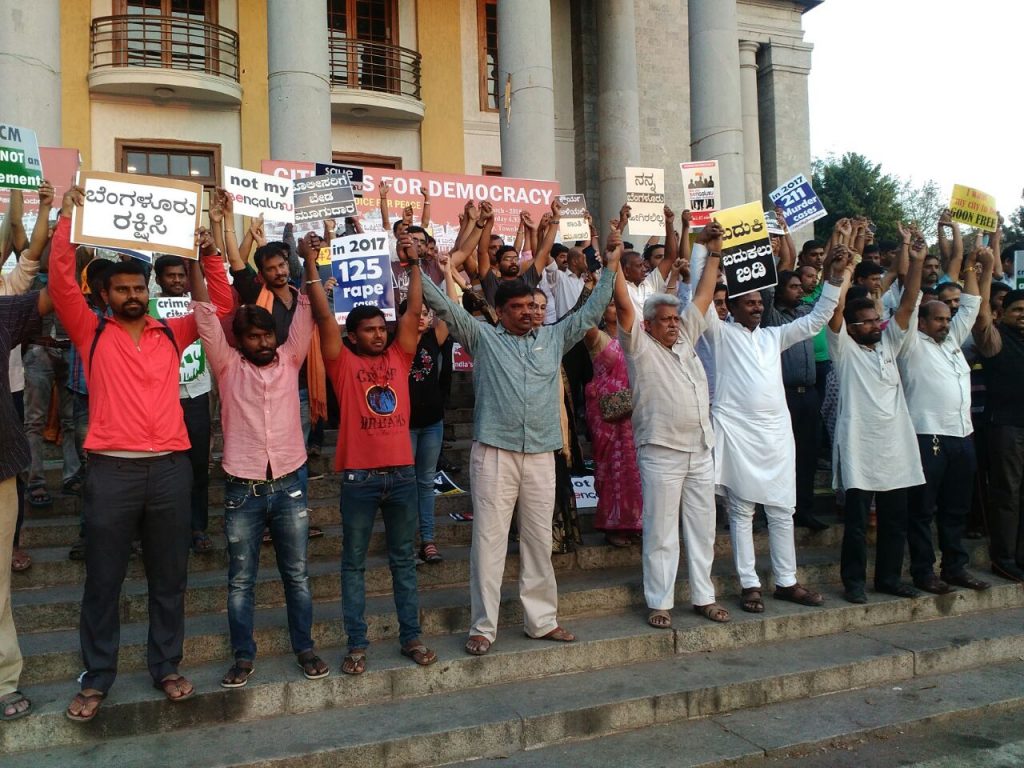 The opening speech was made by renowned actor Shri. Suchendra Prasad. He lamented the conditions prevailing in Bengaluru. He expressed his concern about the way the government seemed to be unconcerned about the rising crimes in the city. He said that the city belonged to everyone and it was the duty of everyone to come together to raise our voice. In a democracy we have to express our concerns and awaken those who rule us he said.

Next to speak was famous actor Jaggesh who said that he was expressing his concern as a concerned citizen and not as a member of any party or as an actor. He recalled the Bengaluru of yore which was a city that was an amalgamation of several cultures and religions but was peaceful, calm and had seen very less crime. He reminisced that earlier in Bengaluru even a constable was good enough to instill rule of law. But today sons ofpoliticians behave like roadies and brutalize innocent citizens he said. He further said that he was here to demand justice from those who turned his city to a crime city. Even police themselves are not safe under the prevalent circumstances he said. He lamented that the police too is influenced by politicians and are not free to function as mandated. No one seems to be safe in the city today. Bengaluru ranks high in the number of crimes in the country. We need to stop this tide. This protest is apolitical and everyone here have come together as concerned citizens. We need to question the powers that be without fear to restore the glory of Bengaluru Jaggesh concluded. Following the talk by Jaggesh, a folk song on the prevalent culture of crime in the city was sung by Hongal and team on the occasion. Dr. Vijaylakshmi Balekundri, famous cancer surgeon spoke next. She expressed happiness at the initiative and the participation of everyone for a noble cause. She expressed concern over increasing cases of chain snatching and mugging in the city. I hope peace is established in the city and becomes a garden city again she opined. Senior Actress Tara Anuradha spoke on the occasion and said that not just Bengaluru the entire state is in the grip of criminals. A report submitted by a committee on crimes in the city and state is gathering dust without any action she lamented. The current govt claims to have provided so many ‘bhagyas’ but a crime free city and state for women and children is also a big ‘bhagya’ she said. She concluded that she is happy to witness the participation of prominent people from various fields. Historian and famous chronicler Shri. Suresh Moona spoke and said that we need to think about the solution to our problems in the city. He said we can find a way out when each citizen thinks the city as his or her own city. Only then we can find a solution he said. We should think about Bengaluru for the next generation and bring about the change in the mindsets of people. He said that it is our duty to take the history and glory of the city to each house in the city. We have the responsibility to not only maintain the vision of our founder Kempegowda but also take it forward, he concluded. Dr HS Prema, famous dietician spoke next and recalled the glory of Bengaluru but lamented the increase in rape cases in the city. Young girls during our childhood were able to move freely even at night a feat one cannot fathom today she said. Where and how did that Bengaluru go? Today parents are forced to accompany their wards to tutions. We need to restore the safety that this city was famous for, she concluded. Shri M Shankarappa of Madiga Dandora samiti spoke next. He recalled how Bengaluru was full of greenery but today it has become merely a city of opportunity for those who have come from outside and they have no sense of belonging towards the city. He said that the police are also not trained to deal with specific crime which has led to such increase in crime rates. He concluded by saying that more youth should participate in such initiatives and work for the state. Lahiri Velu of Lahiri Audio company talked about the free availability of ganja and drugs in the city. He said along with pollution of the environment, the minds of the people are also polluted today. What happened at UB city is shameful and makes one think if a government exists at all he said.

Dr Vijaylakshmi Deshimane called for an end to the crimes in the city for the democracy to survive she said. We should strive to retain democracy she concluded. Tree Doctor Shri. Nishanth spoke on the occasion and rued the way trees are ill treated in the city. Acid is used to stem tree growth and illegal banners are nailed which kills the trees he said. Trees are cut incessantly which shows that along with humans even trees are not safe in the city he concluded. Famous lawyer and former Advocate General Shri Ashok Haranahalli talked about the city plan and lack of its implementation. He said that the law framed in 1976 is still used to plan for the city. We had to update the laws governing the city based on the current conditions bu we failed to do so he said. The city chokes, crimes increase and population grows due to lack of planning. We have to think of the long future and plan accordingly. The police has to be independent but that is not the case today and seems that the rule of law does not exist.

Infrastructure planning is abysmal and we might have to migrate elsewhere he rued. We have to wake up and alert the powers that be he concluded.

Giridhar Upadhyaya of Mythic Society in conclusion said that even we have a responsibility to ensure that we elect responsible people to govern us and not those who provide support to rowdy and antisocial elements. A human chain was formed at the venue by all the participants in a show of solidarity with the cause. A large wall of peace was setup at the venue where everyone at the demonstration, including the dignitaries, signed on it to express their support for the cause espoused by Citizens For Democracy.