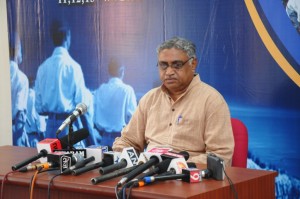 On the first day of the RSS annual national meet, Akhil Bharatiya Pratinidhi Sabha (ABPS), Dr Manamohan Vaidya, Akhil Bharatiya Prachar Pramukh, briefed the Press.
He said: The conclave will focus on two issues. The serious threat facing our Nation due to China’s aggressive policies and the rampant corruption plaguing the country. The delegates will discuss then thread bare and pass resolutions.
Replying to a quiery he clarified that: “Sangha will not vouch-safe any corrupt person whoever he may be”. Mere discussion about a particular issue or about a particular person will not suffice. The conclave will discuss the root cause of corruption in its totality. The issue is alarming and the urgency is evident since, of late, even the judiciary is not bereft of corruption.They will draw a long standing contingency plan to root out this draconian practice and also the role of every concerned citizen in achieving this herculean task.
Regarding our Akila Bharat Karyakarini member Sri Indresh Kumarji’s CBI inquiry he said that :”Sangha has clarified it already. Sri Indresh Ji is cooperating at every stage of the enquiry. He is not absconding”.
China’s often aggressive policies and intimidatory tatics with respect to our country’s border threatening our national security will also be a matter for discussion and suitable resolutions will be passed.
Concluding the briefing he referred to the annual report which was explained in brief by Sri Suresh Joshi ji, Sarakaryavah to the delegates after the inauguration and said: “Central Government’s weak kneed policies, irresponsibility and lack of will to take strong action against the corrupt have added to the country’s vows” and concluded the press meet.