22 Aug 2020: Bloomsbury India, the book publishing company  has decided to withdraw  the book ‘Delhi Riots 2020: The Untold Story’  authored by Monika Arora, Sonali Chitalkar and Prerna Malhotra. The book was to be released on Aug 22nd 2020. In a statement, the publication house cited a ‘virtual pre-publication launch organised without our knowledge by the authors’ as one of the reasons for its decision. The initial plan was to release the book, which documents investigations, interviews conducted by the authors. It is said that Bloomsbury has budged to the political pressure of Congress, ideological pressure from the Communists and Islamist pressure too. Journalists, Intellectuals and free speech advocates reportedly have brought in pressure to which Bloomsbury has succumbed to.

Publisher @BloomsburyIndia is releasing a book which seeks to blame minorities for the Delhi Pogrom.

Nupur Sharma of OpIndia & CRIMINAL KAPIL MISHRA OF BJP are guests of honor at the release.

Apparently it is interesting to note that Bloomsbury still goes ahead with Shaheen Bagh: From a Protest to a Movement authored by Ziya Us Salam, Uzma Ausaf.

The North East Delhi experienced communal violence early this year. The violence which started on 23 Feb went on for few days. Monika Arora, Sonali Chitalkar, Prerna Malhotra with an intention to unearth the truth related to the violence, occurred in the backdrop of the Citizenship Amendment Act of 2019 had written a book and Bloomsbury had offered to publish. The book was to give an account of the  Delhi Riots: The Untold Story was intended to provide insights to the plot of the meticulous planning of the incident, the weapons aggregated in the endeavor to make it the worst violence in the national capital 30 years.

@BloomsburyIndia what happened?
-We sent draft of book which U approved
-We signed contract, exchanged emails
There was no problem.
-But when leftist-fascist lobby tweeted, @BloomsburyUK
pressurized u to withdraw
-Will international pressure decide what Indian readers will read? pic.twitter.com/dd91QDugjt

It is said that, the book was available for pre-order, and a large number of people had pre-ordered the book ahead of its planned launch in next month. 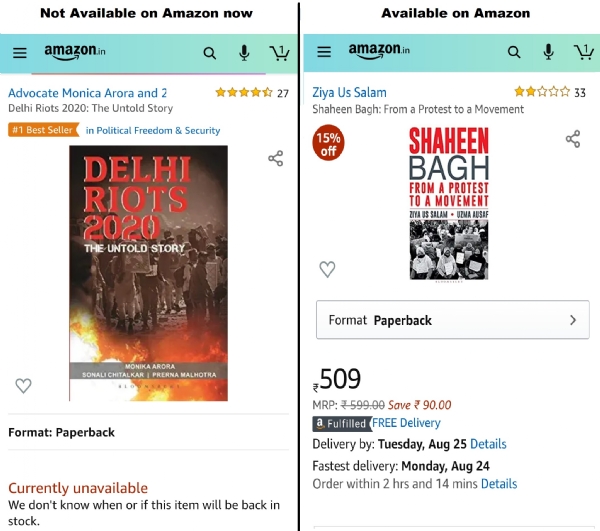