Sabarimala not a case of fundamental right but following temple traditions

09 Dec 2018, Bengaluru: A. talk by Shri Nanadakumar ji convenor of Prajna Pravah and Akhila Bharatiya Karyakari mandal, RSS was organised at Rastrothanna Fitness centre in Bengaluru today by Sabarimala Ayyappa Samrakshana Samiti. The event was chaired by Shri. Nirmal Kumar Surana, Social activist and Managing Director of Hosa Digantha. The event started with a invocation song in Malayam sung by Smt. Sridevi.
Shri Rajesh Padmar welcomed the guests and introduced them to the audience. He upraised the audience about the background of the talk, about Sabarimala Ayyappa Samrakshana Samiti which is organizing such talks and events to educate the common people.
Nanadakumar ji spoke on the entire Sabramaila issue, it’s origin, forces acting against Sabarimala, machinations of the Communist Kerala govt to hamper the Sabarimala traditions, and the way forward. Below is an exceprt of his impassioned speech.
“Sabarimala is not a case of fundamental right but that of following rules and regulations of a traditional temple. Those who judged against Sabarimala traditions were those who deem Western Morality as an ideal and should be adopted here without any considerations for local traditions. People who foisted the case on Sabarimala are those who have no idea about our traditions, meaning of shuddhi, and are even inimical to Hindus. Even the Kerala Police has acted in haste and has attacked the devotees. One of the IPS officer’s had even desecrated the Irumudi.

Ayyappa’s story is about the synthesis of Yoga and Moksha. In Puranas his story starts with ax Manthana and his birth for a reason to vanquish a demon. The life of Ayyappa and tradition of Sabrimala is the belief of his devotees. Hence Ayyappa should be visited if you are a believer and it is not a place for someone’s activism.

As per the Puranas, when Ayyappa went for Sadhana deep inside forest, people wanted to go along with him. But Ayyappa laid some conditions and regulations for those who wished to visit him. Restrictions on days and who can see him were laid down. Brahmacharya Vrata, vow of celibacy, was paramount. This is what a devotee is expected to adhere to before visiting Ayyappa and this belief system has existed for centuries.
The case of Nataraja temple in England where it was judged that the rights of the Temple diety is paramount is a case in point. Similarly, Faizabad court had ruled that the Janmabhoomi in Ayodhya belongs to Ram Lalla. But the SC judgment over Sabrimala has attempted to nullify this. This is not just the judgement over Sabrimala but will affect every other Hindu temple which can be similarly targetted using the same judgement. Even local temples can be taken over which is dangerous.

Our traditions are diverse and not homogenous unlike Abrahamaic gods. Force fitting western standpoint on God and society on our cultural traditions is wrong and dangerous. Sabarimala Ayyappa tradition is one which brings everyone irrespective of caste, creed, profession or income. Such harmony was brought about informally through the traditional practices of thousands of years. But today Pinarayi Vijaya’s government is out to destroy this natural harmony of the holy site.

The philosophical importance of Sabarimala and the reason the pilgrimage is taken is also important. A devotee seeks Moksha by visiting Swami Ayyappa. Sabarimala tradition is as per Kerala Agama tradition which has to be followed by those who manage the temple.
Sabrimala is visited by more than 5 crore people from many southern Indian states. It’s a informal centre for Hindu consolidation which is a thorn for anti-Hindu forces for many decades now. Those who wanted to Evangelize the entire state had attacked the temple way back in 1950. But even today the police investigation report which had exposed those who had attacked had not been tabled in Parliament or made public even today. Later in 1980’s a cross of St Thomas was planted in Nilakkal to usurp a hill close to Sabarimala. Due to strong protests by Hindus the cross was moved away from the 18 hills.
Today same Evangelical forces led by KP Yohanan group are out to attack Sabrimala again. They have brought huge tracts of lands worth Rs. 2000 crores to covert the entire area to a tourist centre and destroy the sanctity of the entire area. Pinarayi Vijayan’s government is hell bent to aid them in their project. A immoral woman activist, Rehana Fatima, was given police protection to visit Sabrimala breaking all traditions. But common people started questioning the government and the High Court too slammed the govt for mishandling the situation. Despite this section 144 has been imposed in Sabrimala and the devotees are being harrased and even arrested.
In the Mahendran vs State of Kerala case, the High Court had judged that the traditions of Sabrimala are paramount and disallowed any women of particular age in violation of the traditions. But the SC has neglected all such judgements and passed the present case disrespecting the traditions. 49 review petitions have been filed and have not yet been heard but the Kerala government is hell bent on forcing the order on the devotees even before that. 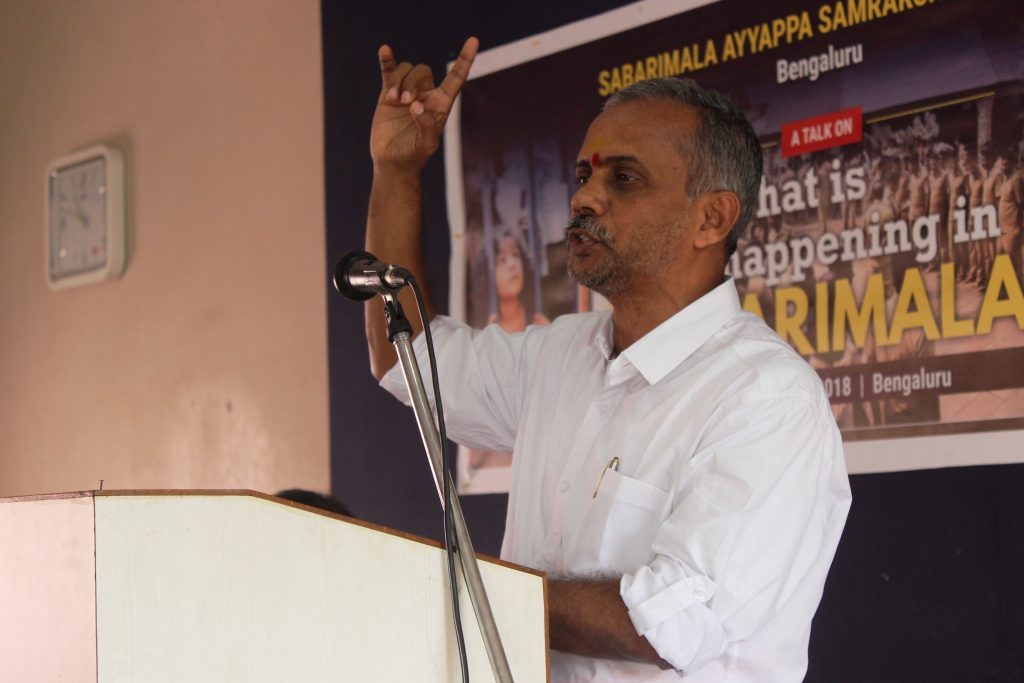 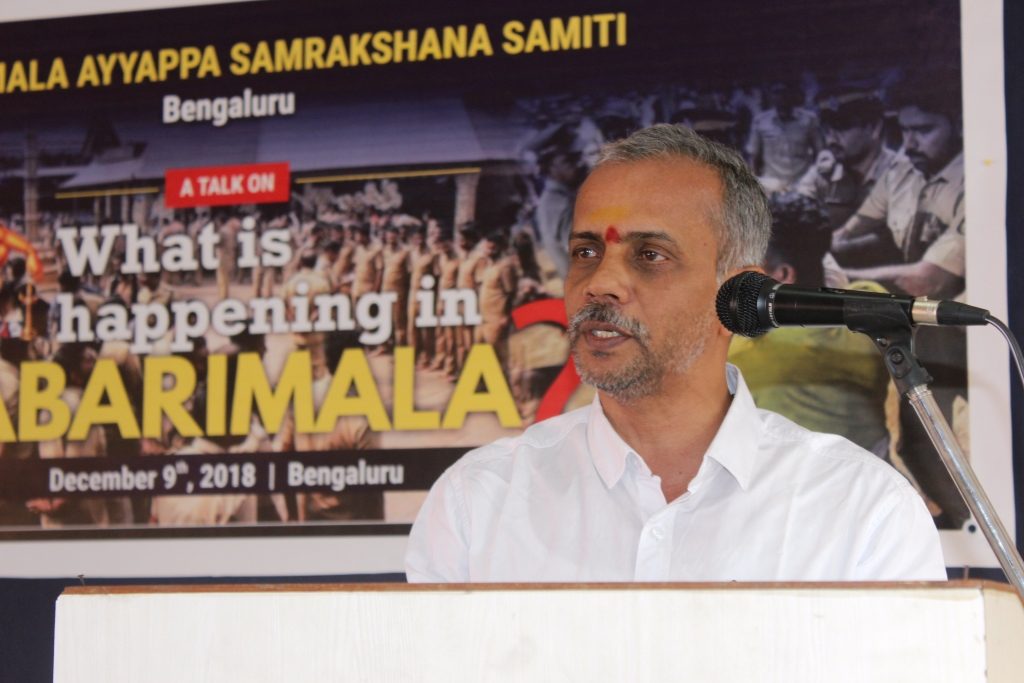 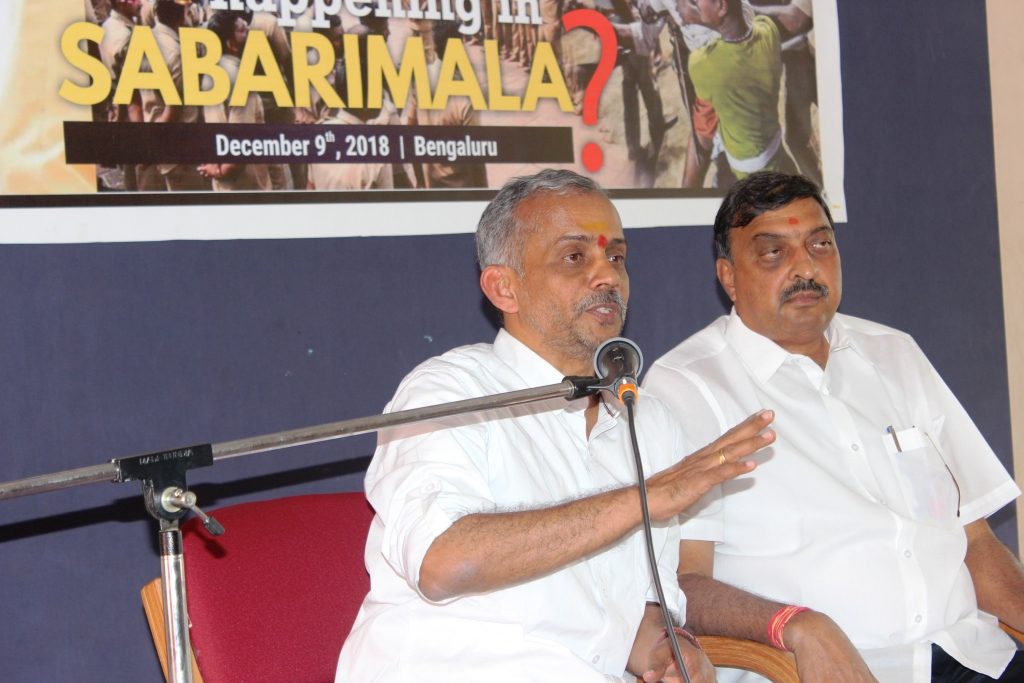 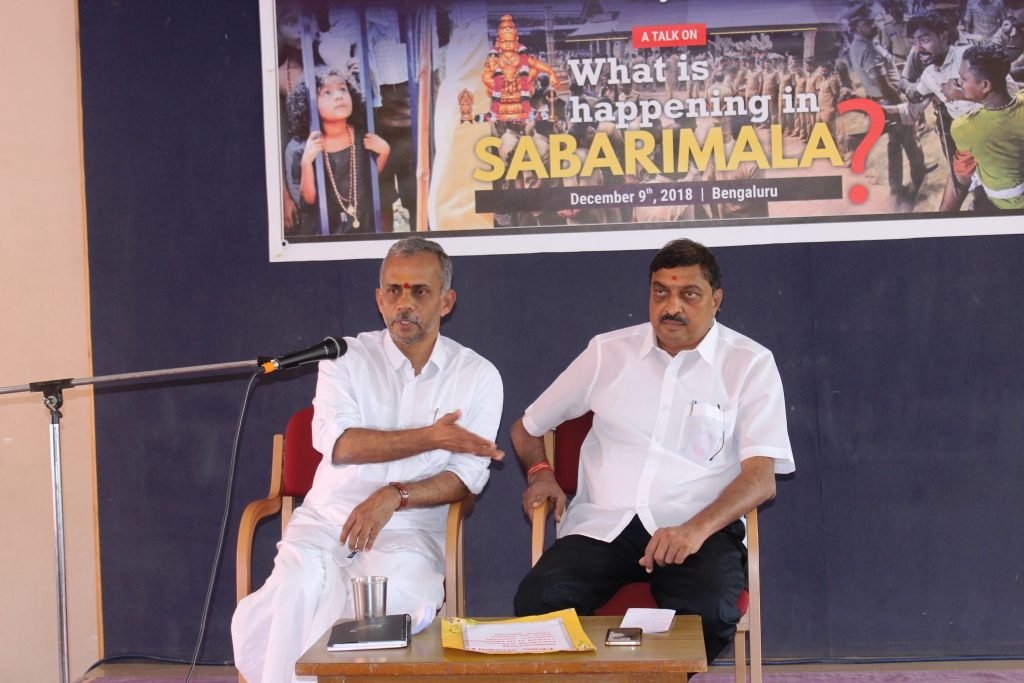 As mentioned these attempts to destroy Sabarimala is not a standalone case as later they will come for other temples. Kollur, Padmanabhaswami temple, and other temples and their traditions will be targeted. As justice Indu Malhotra ruled, this was not their domain to rule. Any tradition or rules which are not harming anyone should be left alone for the devotees to decide. Reformation if needed has to be taken up by the devotees and not the courts.
Its high time we all speak loudly about the Sabarimala issue and not remain as mute spectators as our traditions might be targeted next. We have no other choice than to be part of the agitation.”
A question and answer session with Shri Nanadakumar followed the speech. Shri Nirmal Surana delivered the vote of thanks. He also appraised the audience about participating in the activities of the Sabarimala Ayyappa Samrakshana Samiti. Nanadakumar ji requested the devotees to support the cause monetarily too to moot the legal expenses of the activists fighting for the cause. The event ended with chanting of the shanti mantra.
The entire proceedings was conducted by Shri Binu Padmam.
Report: Sri Prashanth Vaidyaraj, Bureau Chief, Organiser, dakshina Bharat
Photos: Sri Sudhir Padmar
Tags: J nandakumarprajna pravahSabarimala controversySave sabarimala