The article was first published in Kannada daily Hosa Diganta and is translated to English by Smt. Anupama Harish

If Italy’s Goddess of freedom came swimming through a river of blood, India’s Goddess of freedom came dancing through the ink of Lord  Atlee’s fountain pen.  This sentence is a part of an interesting speech given by senior Karyakartha of RSS Shripathy Shastry at Ganesh Park in Mysore in the period 1957/58. This sentence was quoted again by another senior RSS karyakarta Su Ramanna Ji in a casual discussion, the memory of which is still afresh. That was the the logical end to India’s long battle for freedom. The history is still alive in people’s mind to this day – everything including People, events, year, monuments, meetings, stories of armed battles of the youth. Some events haven’t been recorded although they are available in some references. They are interspersed within the lyrics of the folktales of India. It is very tedious to document these struggles while participating in them but not impossible. The struggles between 1857 and 1947, the social, intellectual , institutional, the path of revolution, the lesson of non violence, strategies etc happened in the pre-Gandhi era and the Gandhi era. Congress, flowing like a river in spate sheltered all streams of small movements. 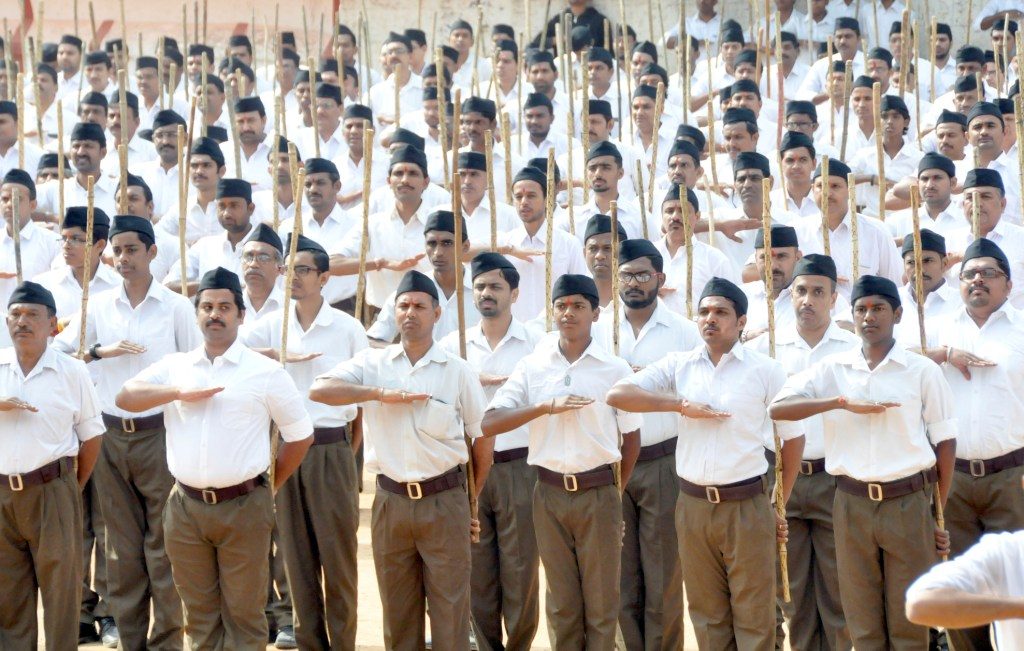 In the same period, many activities that  focused around gaining freedom were happening. For example: Arya Samaj, Brahma Samaj, Prarthana Samaj, Anusheelana Samithi, Hindu Maha Sabha, public Ganeshotsava Samithis, Sevadala was conceived in the womb of Congress, Nabha Gopala Mitra’s Hindu Mela, Saint Tukadoji Marahaja’s Shree Gurudeva Seva Mandal, Subhash Chandra Bose’s INA, Friends of India Society built by Indians living overseas were the most important. Although the ultimate goal of all these activities was our country’s freedom, their working style, function, range of influence were completely different  and unique. Organisations like Anusheelana Samithi and Hindu Mahasabha have worked aggressively, many other organisations worked  silently  choosing the path of reform and change. Not only were the numbers of such organisations higher but also the inflow of people who were part of the struggle were headed in the same direction. The work of Brahma, Arya, Prarthana Samajas and Hindu Mela followed the path of non violence. The irony is that the narrative that kept growing was that non violence meant only the works of Gandhi and Congress and this has remained so maybe permanently. Whatever nonviolent attempts were made socially and rationally, leave alone appreciating these organisations for doing the same work as themselves, the Congress leaders even hesitated to praise them verbally. The unpopular truth is that there was some difference of opinion about the choice of path within the Congress. The other organisations had no such confusions about their nature and path. The Congress leaders had a certain critical opinion about such organisations. The one sided idea of ‘my way is the highway’, ‘my definition of truth in any matter is always right and final’ had taken root among the Congress leadership. Semitism had influenced their thought and rationale needed for the struggle. Rudyard Kipling while describing the animal world in his famous book ‘The Jungle Book’  has said that when you’re fighting a war with the enemy,  the enemy’s characteristics unconsciously seep into you. It won’t be an exaggeration if we assume that this character analysis is the universal truth across all countries.

The path of entry and exit

In the Kurukshetra war, Abhimanyu’s story can be considered as the chapter that reaches the climatic stage of the Kshatriya. He knew how to penetrate the Chakravyuha but didn’t know the way out. If Abhimanyu knew how to get out of it, the story would have gone in a completely different direction. If we analyze this in the context of social movements, we can see many things clearly. Most common doubts faced by people who enter a movement are, if we have to build a movement ourselves, how do we do it? If the movement has already been set in motion, how do we enter it? How long do we participate in this movement? What is its logical end? How and when can we exit from the movement. Very few think about all these things before starting or participating in a movement. If building a movement is the ultimate goal, then that is a different thing. But if a noble and a sustainable structure is to be created, it has to be a product of a campaign. It needs forethought which is not easy. The fame derived from building a movement can be very intoxicating. In such circumstances, a person’s or an institution’s social journey is as long as the movement itself. To come out of a popular movement and continue the journey towards the primary goal, a person needs clear vision, disinterest in fame and an unshakable attitude to face the dangers of misunderstandings inflicted upon one’s own reputation.

Two great examples that emerged from this movement are Yogi Arobindo and Dr. Keshav Baliram Hedgewar. Aurobindo, who had served as a captain of Vanga-Bhanga movement, then changed his path towards building the future of India. Aurobindo is a collective personality of thought and action.

He made Pondicherry the center of his future work. He had no doubts about India’s freedom. He did his job of reminding Indians about India’s spiritual responsibility through his writing and work. The emergence of a new society happens through peace, not by movements. But it is not the final opinion that the movements are not required at all.

Dr Hedgewar, who had close links with the revolutionaries and was involved in the armed struggle, came out of the way and built a new way of “organization”. He presented the ‘Sangh way’ that included not only those who marched on the path of non-violence, but also those who took the path of revolution. They laid the first brick for the task of building an organized society. He thought that the vision of Hindu society should extend beyond merely gaining independence.

Freedom is an illusive word, wrote a poet. The illusion of freedom engulfed all. This became the life’s goal for thousands of countrymen. The Sangh wasn’t a stranger to this.

Dr. K B Hedgewar participated in the founding of the sangh and later in the freedom struggle along with formulating plans. He held an official position in the Congress until 1927.  After the Sangh was established, the most common questions that arose were, what and how much is our role in the freedom fight? Hedgewar, a 36-year-old strapping youth, built the Sangh with the philosophy that it was to be one among all and all inclusive. The decision he took that day has formed the guiding philosophy for five generations of RSS karyakartas this past century.  This is called Sangha Samskruti (Culture of the Sangh). He made it very clear to the Swayamsevaks that the Sangh shouldn’t have a separate role in the struggle for freedom nor do anything to derail the speed of the freedom movement or weaken it in any way whatsoever. He decided that they should work alongside Gandhiji’s leadership under the Flag of congress, follow their plan and their working style. Usually when someone supports a movement, they publicly announce their support, make sure it gets some coverage in newspapers, , show up in their trademark uniform on the day of the movement, hoist their flag under their own banner to be noticed. This is what is common. It is a little difficult to work for someone else’s success selflessly. But the Sangh has spared itself from the lure of fame and identity. The motto of being one among all is not just a declaration, it is the true philosophy of the Sangh culture.

The same philosophy passed on to the future generations too. There are many more incidents where swayamsevaks proved that the Sangh culture is not like stagnant water, rather it is always flowing.

The Sangh culture laid down by Dr Hedgewar is the root cause for this behaviour of swayamsevaks.

Before the founding of RSS, Dr Hedgewar had to undergo imprisonment once. (August 19, 1921 to July 12, 1922). The events where swayamsevaks participated in the independence struggle since the founding of the RSS have been documented in many books.

The same spirit flows from root to leaves

For Congress, the culmination of the freedom struggle was ascension to the Delhi throne after the departure of British from India.  It is not surprising that the leadership of the day was tired.  Future course of action remained a big question. The Nehru government was neither prepared to face division of the country nor was ready to handle demographic changes and the  integration of princely states. Unpreparedness at the time of obtaining freedom exposed scarcity in thinking capability and management inability.  Gandhiji had stood behind Muslims and Nehru was sticking to power. Hind Swaraj was relegated to a bookshelf.  Sangh continued its journey towards achieving the ultimate goal of ‘Param Vaibhav’ (Ultimate glory) as it was not working with the sole and limited intention of seeing India independent. The Sangh culture of social life predominantly flourished during 1925-1947. It was like a flower blossoming in the midst of fire!

The culture of Sangh is aptly described in the following lines of Kuvempu, a renowned Kannada poet:

Cuckoo singing in the spring-forest

does not want to be a king

buzzing of bees in a flower tree

is not because of fear of the King

Sangh acquired this culture from its roots.  When there is no burning desire at the roots, the branches will not be influenced. Leaves remain healthy as long as the branches are robust.