Kerala’s senior most Sangh Pracharak and former national working president of Bharatiya Mazdoor Sangh (BMS) R Venugopal breathed his last in the wee hours of June 11, Thursday, 2020. He was 95 and was suffering age related ailments. The death occurred in Madhava Nivas, Kochi, the Kerala Pranth Karayala of RSS. 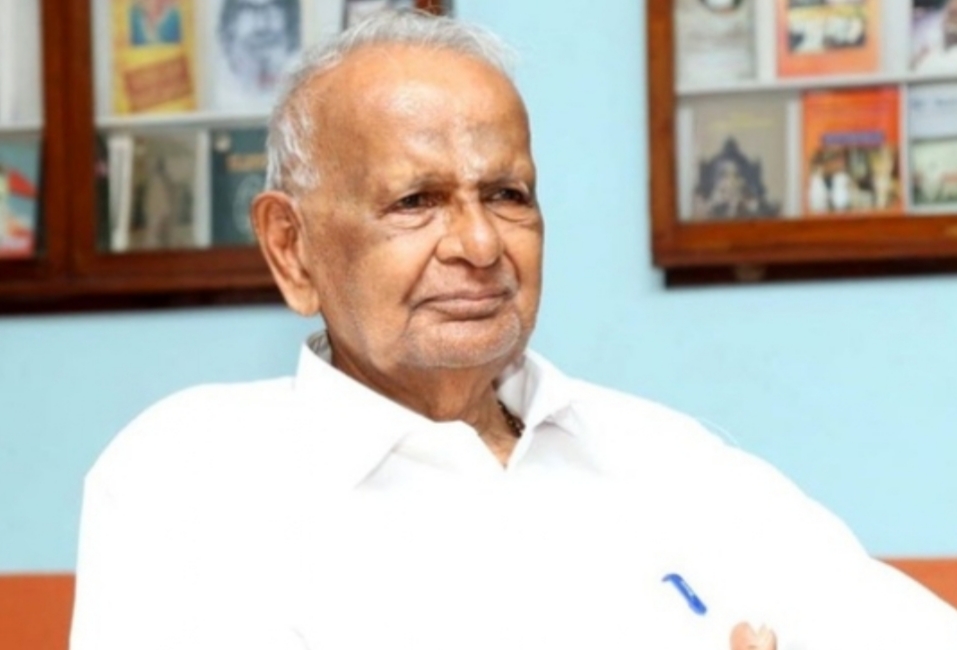 Venugopal was one among the first batch of Kerala’s indigenous Sangh Pracharaks. P. Madhavji, T.N. Bharatan, T.N. Marthanda Verma and Kumaran were the others. Until them RSS activities in Kerala were manned by Pracharaks from Nagpur. This ‘first batch’ was groomed by none other than Datho Panth Thengadiji since he started the first Sangh Sakha in Kozhikode when he came to Kerala in 1942.

Venugopalji belonged to Nilamboor Royal family in today’s Malappuram district. The university degree holder left a affluent life and came out to embrace the pains, hunger, struggle, stress and strains of a Sangh Pracharak’s life. He had once told this correspondent that starvation and sleep on the railway platforms were the routines of a Pracharak’s life during those days.

Venugopalji had worked as Zilla Pracharak in various districts of Kerala. Later, he was assigned as the editor of “Kesari”, the RSS inspired Malayalam weekly in the state. Then he was asked to shoulder the responsibility of Bharartiya Jan Sangh for a short period. Later on he was assigned to build the BMS in the state. He did that job brick by brick.

Then the history of BMS and biography of Venugopalji turned into a single story with inseparable threads. He climbed up the ladders of the organization complimented by the success story of BMS. He became the Kerala state organising secretary, national organising secretary and working president later on. Since 1990, Venugopal ji represented Bharat at ILO’s global labour conferences in Geneva several times. His role in making BMS the largest trade union in Bharat is legendary.